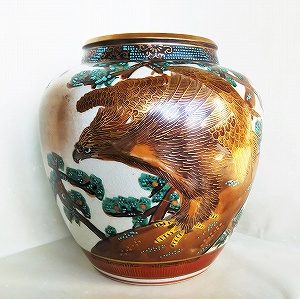 A dynamic picture of an eagle with its wings spread out comes into eyes. Always many viewers are attracted by the elaborate drawing of the feathers. The pattern such as pine and hawk were typically Japanese and it seems that patterns such as hawks on pine branch were preferred. And it is said that the technique of the blue pointillism (青粒) became widespread since the beginning of the Taisho era, so this work seems to be a later work by Tomita Shokaku. 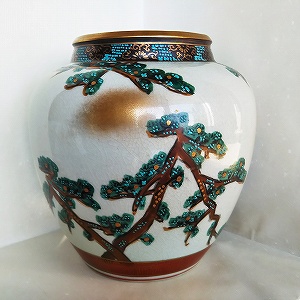 Turning around, the old pine is drawn on the back side, creating a static atmosphere in contrast to the front of full dynamism. The quietness and movement are beautifully expressed. In addition, pine leaves and pine branches are represented by blue pointillism, giving a three-dimensional feel. 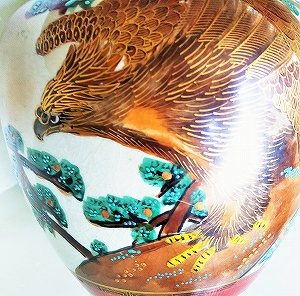 The scene where the hawk is grabbing the pine trunk with its large claws praising any prey with sharp eyes, and the hawk is about to fly away, and makes it wonderfully associated with catching the prey. In addition, each feather is clearly and precisely drawn. 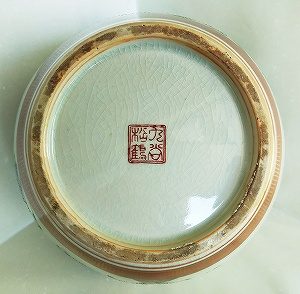 A double square contains the inscription “Kutani / Shokaku”. This is often seen in Shokaku’s works for exports.

Tomita started his pottery business in 1867 and was named Shokaku. He was one of the potters cultivated by Saita Isaburo (Dokai). The design was also Japanese. It seems that patterns such as pine and hawk were preferred in Japan. In his long pottery history, he produced a wide range of works such as flat bowls, bowls with lid, teacups, and pots, so it seems that these excellent works were made under the influence of his teacher Dokai.