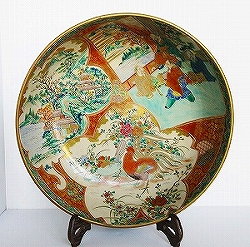 In the end of Edo period, Kutani Shoza used the unique technique of “colored gold style (彩色金襴手)”, which baked gold mud on colored porcelain when decorating the body. This technique was called “Shoza style” and became one of the representative techniques of Meiji Kutani. The technique is also used throughout this work, making it one of the typical “Shoza style”. 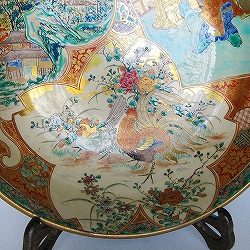 Shoza finished various patterns in “Shoza style”. On the center of this bowl, a typical figure of poultry that had been frequently seen since Ko-kutani is painted by a colored gold style. In the case of Shoza, who especially liked the rural landscape, his figure of poultry attracts viewers by placing the rooster in the farm’s garden prominently on the center of this large bowl. 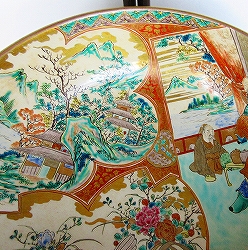 A Chinese-style landscape and people included there are a traditional figure since Ko-kutani. What is interesting here is that the distant view from the window of the room where the literary people are talking, incorporates a part of the mountain drawn in the frame on the left, so it seems that the two figures are related. 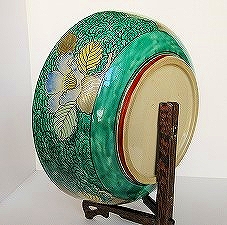 The back of the large bowl is wide, and four large flowers are drawn in the back, and the surrounding is filled with flower patterns in green. It seems to be reminiscent of the back of Ko-kutani and Yoshidaya kilns, and this should not be overlooked. 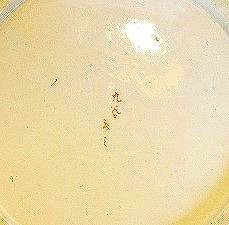 It is said that Shoza’s inscriptions have a way of writing that suggests the production period. From the end of the Edo period to the beginning of the Meiji era, when the technique of colored gold style was completed and Shoza’s fame increased greatly, Shoza’s name meant that it was a masterpiece work (so-called brand), and after he had his surname, the inscription “Kutani Shoza” (written in one line) was added to his works. However, such works are few, and it is inevitable that a lot of works were written as “Kutani / Shozo” in two lines by many disciples and their assistants in Shoza’s factory that reached about 300 people. However,

In addition to his contributing to breeding kutani industry that flourished in earnest during the Meiji period, Shoza succeeded in incorporating Western paints into Kutani in the early Meiji. This was the development of a technique that became the mainstream of the Meiji Kutani, called the “colored gold style”. At that time, Meiji Kutani were proud of its elaborate picture of “Shoza style”, which became the core of export Kutani, and then was favored by foreign countries as a trade item in the early and middle Meiji period. This Kutani ware was called “Japan Kutani” and played a role in supporting Japan’s largest export industry.