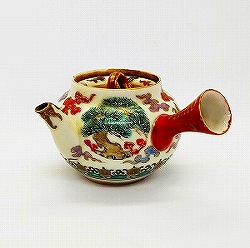 This work is decorated in a variety of paintings such as gold and many colors painting, and is made in a set of “sho-chiku-bai” (a set of pine, bamboo and plum), and “paper crane,” “zuiun” (auspicious cloud). It seems that it was for the domestic market because of patterns familiar to Japanese. 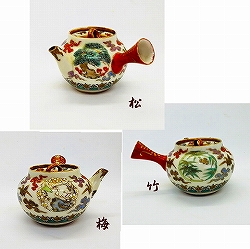 Pine, bamboo and plum are placed in in the three round frames (windows), and paper cranes and zuiun are drawn around them. Sho-chiku-bai itself is painted in various colors, but the scene has a gorgeous atmosphere decorated with paper cranes and auspicious clouds. 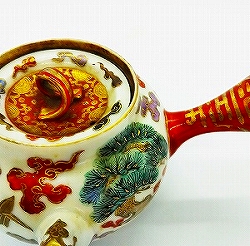 The lid and horizontally extending handle are decorated with rust and gold, and when holding, the gorgeousness of elaborate patters attracts attention. 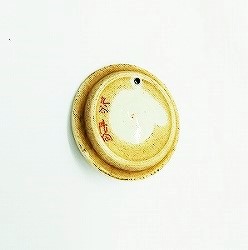 The inscription “Kutani Seikan” is gently written in the horizontal corner on the back of the lid. Unlike other potters, it seems that Seikan intended so that he would appear it casually when the lid was removed, rather than turning it over and showing his inscription at the bottom.

Shimizu Seikan was one of the masters of Meiji Kutani who had been active since the early Meiji era. His works were made of Japanese-style patterns, such as teacups, teapots, and other small bowls for domestic use, and Chinese figures and landscape were drawn elaborately. it was done. Shizuoka was good at meiji kutani with fine paintings. In 1876, he opened a Kutani store in Kanazawa as early as possible and began selling elaborate products. However, in the later years he had no child who succeeded the store, so he closed the store. It is said that he continued to make small works in his later years.