brocade flower-shaped bowl with a samurai under moon light

condition : good on the surface, scratches on the back, distortion 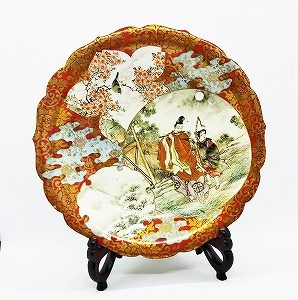 It is a gilt work by Akamaru Setusuzan. Even after more than 100 years, the brightness of the gilt has not faded. On the other hand, a samurai who is blowing a flute and his retainer, flowers and birds, snow-capped mountains (such as Mt. Fuji) and trees are drawn with color paintings like Japanese paintings. 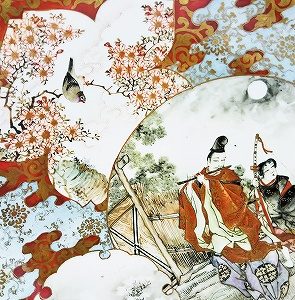 Of the three frames (in the form of a fan, cherry blossoms, etc.) on the surface, the biggest one like a fan indicates the theme of this work, “a noble is blowing a flute at moonlit night”. In addition, flowers and birds, and nearby trees in the distant view of snow-capped mountains are drawn in two flames. It is a wonderful work that harmonizes gilt and colored pictures. 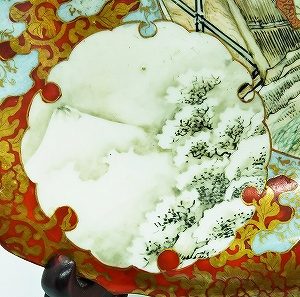 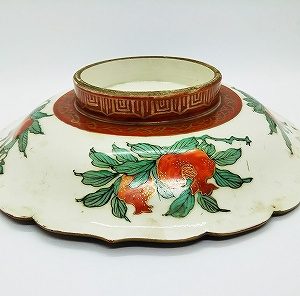 On the back is large spears in contrast. The colored spears are interesting to draw boldly for the gilt work. The height of the bottom is about 2 cm, which is slightly higher and is cut deep inside. However, it is difficult to understand that there is unknown distortion. 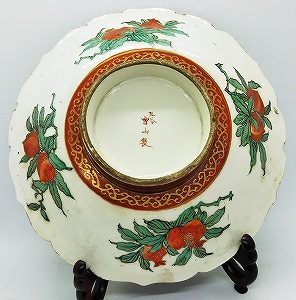 Since Akamaru was called Setsuzan-do, it seems that various back names such as “made by Setsuzan”, “made by Akamaru Setsuzan-do”, and “Setsuzan-do” were written.

Akamaru Setsuzan was one of the masters of Kanazawa Kutani from the early Meiji period to the middle. He worked at the Ishikawa Prefectural Industry Promotion Center and an excellent kiln in Kanazawa. It is known that Setsuzan produced outside Kanazawa because he also has worked for Inoue Shoten in Daishoji town. Mizuta Seizan, who was one disciples of Setsuzan, became one of the masters of Meiji Kutani. His works were many big works such as plates, bowls and incense burners, and this medium-sized bowl seems be unusual.