rust and gold, small plates or handles with pattern of paulownia and phoenix

What you can understand from this work is that it is an elaborate, round flower-shaped plate with edges cut into the shape of the petals. And it is unusual that a small plate has noble patterns such as paulownia and phoenix drawn in rust and gold, and the inscription (name or mark) of the creator is carefully written in red inside the kodai (round foot).

And this work has another name which means handle of fusuma (sliding door in Japanese-style room. The handle is the round part indicated by the arrow in right image and made by metal).

Also, when considered as a small plate, it is imagined that it is not a regular small plate because the edge is wide and have beautiful patterns on it. On the other hand, when considering it as handle of fusuma, it might been not attached to small fusuma because the size is large, conversely, when two handles are attached on both sides of a fusuma, the thickness of the fusuma is no more than 3cm (it is not regular). It is imagined that it was attached to a special single-sided sliding door in a noble mansion. 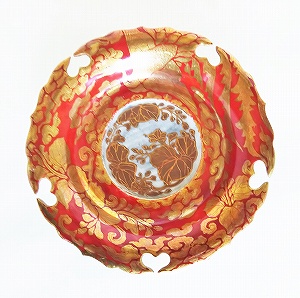 Again, the small plate in rust and gold is unusual, and it is thought that the small piece with such decoration was originally made for ornamental purposes and was diverted to handle of fusuma. In addition, since ancient times, the paper for fusuma and the paintings drawn on it, the wooden flame, and the handle were splendid and elaborate. If these small plates were used for the handle, it would play a role to further enhance the charm of fusuma itself and Japanese room. 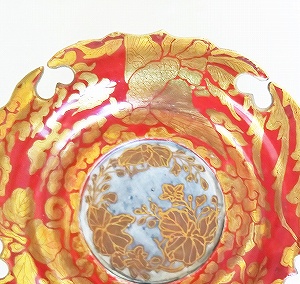 Looking closely at the patterns of phenix and paulownia flowers drawn on the surface in rust and gold, both patterns are noble because they have been used in Emperor’s clothing and furniture since the Heian period and been treated as a formal pattern next to pattern of chrysanthemum. Since the Meiji period, the paulownia flowers pattern has been treated as the emblem of the government (the prime minister and the cabinet) following to the national emblem of Japan. About the number of paulownia flowers, the use for the imperial family and the government has been distinguished from general use. On this small plate the number of paulownia flowers is indistinguishable. However, it can be said that it was for a pattern chosen for people who were high and noble. 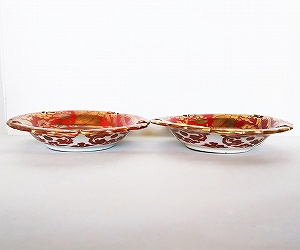 The closer to the edge of the plates, those are made thinner and have the cuts and distortion. However, I guess that it is very difficult to do molding and burning of such fine work (sculptured). 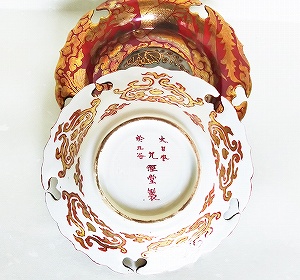 As mentioned above, there is inscriptions in red in the kodai of the back. “dainippon” (大日本) is written on the right side, “kutani” (九谷) is written on the left side, and “made by Kyukei-do” is written in between. Considering the purpose of this work, it tells us that this work is expensive and valuable.

Tomoda Yasuyoshi (Kyukei 九径) studied painting from famous painters and potters at that time. And he started the pottery business in 1881 and produced excellent works like this work. Particularly, Kyukei’s fame was raised by success in improving Western paints suitable for kutani. taking advantage of his experience of studying painting and ceramic manufacturing from Gottfried Wagner. The cheap and high-quality paints produced by him added a variety of glamorous colors to the coloring of the Meiji kutani, so they were spread among the potters. His improved paints did not peel from the surface of kutani body and contributed greatly to making high-quality kutani.