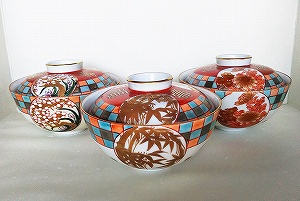 This work consists of three sets of bowl with each lid. The whole is elaborate and well thought-out.

Each have three oval windows (flames) on the side of bowl and on the surface of lid, and in the windows the designs of “four princes” (四君子) are drawn in colorful paints (later mention).

“Four princes” are words that praise four species of orchid, bamboo, chrysanthemum, and plum as princes in plants.

In addition, three letters of fuku (福 happiness) and longevity (長寿) are written outside the window of lid, and a paper crane is drawn in the handle of lid.

The checkered pattern, which means “prosperity” because the pattern continues without interruption, is usually drawn in three colors: orange, light blue, and ash.

This work is painted in elegant colors for “four princes” and is elegantly finished. The design of “four princes” has been used in various arts and crafts since the Edo period. When this creator successfully celebrated his 54th birthday (he lived up to 74 years old) and might try to make a memorial work, it seemed that he put his feelings on “four princes”. So. this work is unique one. 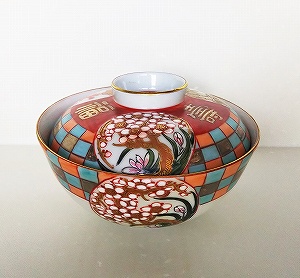 It is said that these four plants representing “four princes” in China were added to Japanese meaning which let us feel seasonal feeling in Japan.

Ume (plum) and orchid are drawn in a window. Ume give off a noble fragrance ahead of spring, despite the severe cold in winter. The orchid that represents spring is modestly added beside ume blossoms in full bloom, so we feel that orchid is quietly waiting for the spring that is coming. A skill of master craftsman would be felt in such a composition. 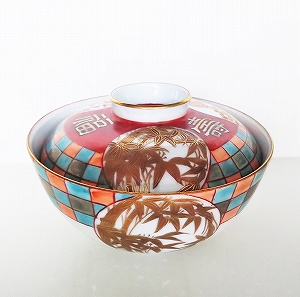 Bamboo does not lose its ecstatic blueness even in summer, and the leaves make a smooth sound with a slight breeze. But this bamboo is painted in brown. However, it seems that he wanted to show that he was growing at any age. 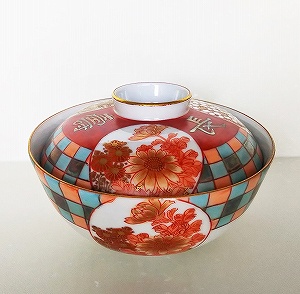 Chrysanthemum blooms noble flowers in autumn as if they are against the cold and shows a stunning appearance. So, chrysanthemum petals are likened to the sunlight and became the imperial crest of the Imperial Family. It was considered that chrysanthemum have the right elegance for “four princes”. 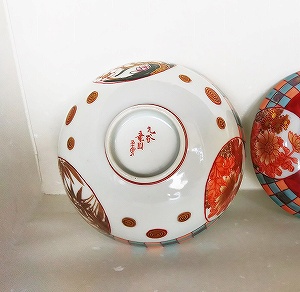 In this work, this creator took up “four princes” as four noble gentlemen in a central design (mikomi 見込み) and wrote the inscription of “kutani Ryuzan 54 years old”. It seems that he conveyed the feelingless of the creator who had successfully lived long. From this work with memorial and auspicious designs, patterns, letters, etc., we might feel the feelings of this creator.

Ishino Ryuzan studied Japanese painting from painter and learned more about painting for pottery. After he built three large, medium and small kilns (kiln for painting) in Kanazawa City in 1883 and began pottery business. It is said that his skill in expressing delicate designs such as figures of people, landscape, and flowers and birds was outstanding among the contemporary painters.

At the same time, he wanted to express his designs in his own mixed paint. For this purpose he researched the compatibility of kutani body and paints, and developed paints one after another. His technique of blending paints for pottery was similar to that of picture painters.