red and gold, small dishes with flowers and birds 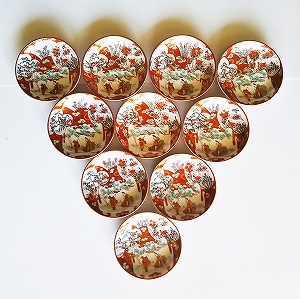 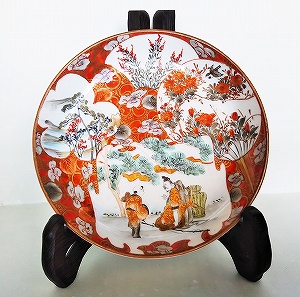 In each of the 10 dishes, the red base is cut off by four windows (flames), and the windows are filled with flowers, figures, and landscape. They are pine trees, trees with red flowers, noble with his companion, towering mountain in the distance, and those designs are finely painted and fit neatly in each window. There are so many highlights that viewers won’t get bored

These designs remind of government-made designs found in Japanese arts and crafts in the early Meiji period. That is because kutani in the early Meiji period incorporated a Japanese design (many kinds of flowers and birds, and scenic spots). Because they were instructed to use as a motif for exports to the West. After, the master craftsman of kutani came up with various motifs and created his own design, creating an original style of painting and adding a lot of flowers to Meiji kutani. 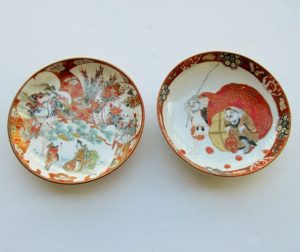 In 1875 after the death of his master Saita Isaburo (Dokai) and master craftsmen of red painting, Sangetsu worked as one of the heads of the Saita Isaburo school together with the first Hashida Yosaburo. The “Fifteenth Day Meeting” was established, and the members of the school shared their research results to improve the skills of the school. One of the research results was creating the unique vermilion-red that becomes a red-paint glaze, and the research and development of another glazes.

The left work in above image was made by Sangetsu and the right one was made by Isaburo. Even after more than 100 years, the color has not faded and remains beautiful. In this way, the traditional red painting called Sano akae is still handed down. At present, Fukushima Buzan (lives in Sano Town) is one of modern master craftsmen of kutani. 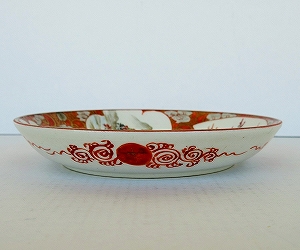 These dishes are about 12 cm in diameter and is slightly deeper because it has a warped-up edge. Dishes of 12-15 cm diameter were called “namasu” plates. These dishes are a kind of side dishes that were used by the common people since the Edo period. At first, a set of 10, 20 or 30 dishes were prepared for samurais and big merchants, and it was used in a way similar to “a small dish to share” that was prepared for taking food on big bowls and plates at the banquet in the era of ko kutani. 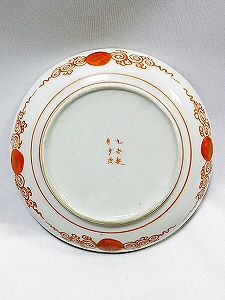 The name was still rare in the early Meiji period when Sangetsu was active, and “Kameda-ga (means that Kameda drew)” is written in the back. Hashida Isaburo of the same school also wrote “Hashida-ga” in his works at that time.

From the Edo period, “kaku-fuku” was often written in, but it was the first time that Kutani Shozo wrote his name in his work, and gradually the master craftsmen of the Meiji period began to write their names. It is said that it was an expression of self-confidence as a painter of pottery that was created by a fine work, or that the names of pottery merchants meant a “brand product”.

Kameda Sangetsu entered into the Saita Isaburo school, studied mainly red-painting, and continued to study as a potter of the Isaburo school even after he was independent. He put a lot of energy into his glaze research. In this way, it became a master craftsman who specialized in fine red (vermilion) painting and gold. Then, he established his own painting style.