condition   no chips or cracks   some minor handling wear 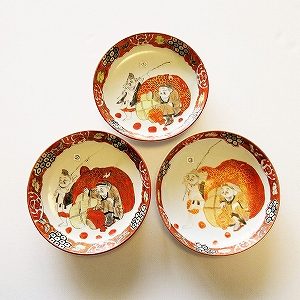 The name “Hashida-ga” （橋田画）is written on these three dishes, and “Hashida-ga” is considered to be the work of the first Hashida Yosaburo. It is interesting that their designs and white bodies of these dishes are slightly different. Unlike mere craftsmen, when master craftsmen made these dishes with the same design, it is not surprising that each dish was different, because Ebisu and Daikoku were often featured in the motif for his painting. It is presumed that each dish was one of several sets and have been separately inherited. 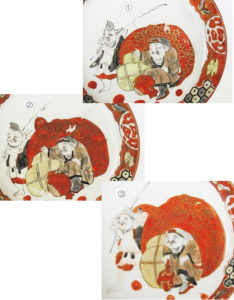 Let’s look at the subtle differences between three dishes.

about dish ①  Compared to dish ② and ③, Daikoku’s “large bag”, “small gavel”, and “rice bales” on the side are larger than dish ② and ③. Ebisu’s fishing rod has “red snapper” suspended from it.

About dish ②  Ebisu and Daikoku are drawn with full overall picture, but the “red snapper” that is unique to Ebisu is not drawn. Wholly, it seems that Daikoku, the god of agriculture, is drawn somewhat more carefully rather than Ebisu, the god of fishing.

About dish ③  The dorsal fin of the “red snapper” can be seen behind Ebisu, but it is not hung on a fishing rod. On the other hand, the line drawing of Daikoku’s “rice bales” and “large bag” is also beautiful, and the gold line is also drawn very finely. The expressions of Ebisu and Daikoku are also drawn gently. 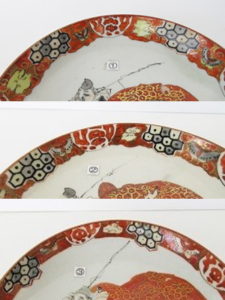 The patterns along inside rims are slightly different, and the way of drawing butterflies and the colors in the turtle pattern are different. In particular, the dish ③ has the narrow width of the band, and the blank space of its body is more prominent than that of ① and ②. 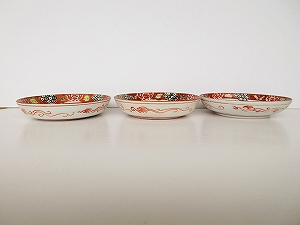 The three dishes have a good shape no matter where they are viewed, and are a bit deep. They are called “namasu dish” (namasu means one of Japanese watery dishes), and the more it goes outward, the more it is warped. The dish ① and ② are slightly steep, while the dish ③ is relatively gentle. 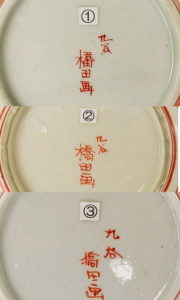 For all three dishes, the name “Hashida-ga” is written in each back (this is the same style as his colleague Kameda Sangetsu). However, to be precise, the dish ② and ③ are correct, but the dish ① has a wrong part of the character.

Also, it is interesting that the fact that about only the dish ① the direction of the picture on the front and “Hashida-ga” on the back is upside down. It seems to be related to the reason for the typographical error mentioned above.

It is said that the first Hashida Yosaburo initially put “Hashida ga” on the back and changed to “Yosaburo” from a certain time. Since then, Hasida generations followed “Yosaburo” and put “Yosaburo” on the back of their works.

about creator  of this work

He was one of disciples of Saita Isaburo. He developed painting designs, use of pigments and others, working with Kameda Sangetsu. So, he contributed to the foundations for the ceramics industry in Sano Village (now Sano Town, Nomi City).