a pair of gourd-shaped sake bottle with flower, birds and two characters  (the latter) 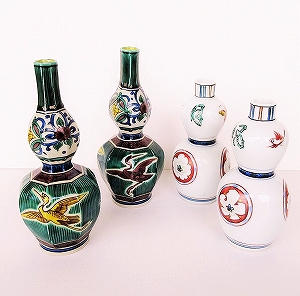 All two pairs are thought to be the works of the first Matsumoto Sakichi. Even the shapes are a gourd, if the composition and the color scheme are different, the viewer will have a completely different impression. Both are contrasting.

The former is drawn on the octagonal surface with three cranes and patterns in four colors of green, yellow, purple, and blue (excluding red from kutani five colors), and pattern of the countless vertical lines in black zaffre is prominent.

The latter is drawn with birds, butterfly, other patterns and two characters in kutani five colors, and the boldly large space is prominent. 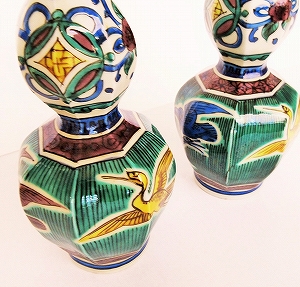 the powerful composition of the former;

In order to make the appearance of the flying cranes clear, and to make it clear that they are the subject of this work, they are placed in the center of the body. They are embedded in the white outline and are colored in three colors, yellow, purple and blue. Even though they are surrounded by the vertical lines in black zeffre, viewers might feel the “power” that seems rebound the vertical lines.

The order of the drawing of cranes is not same, just because the bottles are a pair. On one bottle, the order of yellow → purple → blue is drawn clockwise. The other is in reverse order. The three cranes are drawn so that they look symmetrical in three dimensions. The composition is well thought out. 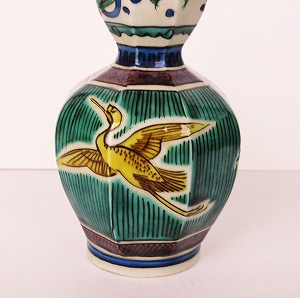 yellow crane on the sake bottle 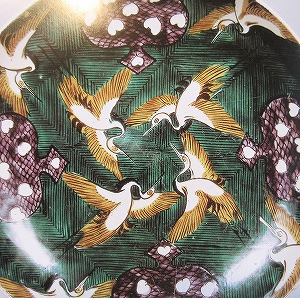 the painting of the former;

The flying cranes are painted vividly in yellow on the side. It is thought that yellow crane imaged the yellow cranes on Ko kutani (above picture).

Sakichi was one of the painters who worked hard to restore the five colors of Ko kutani, and also known as the master of ao-kutani. So, the composition by Sakichi is made up by three flying cranes which oppose countless vertical lines in black zaffre. It seems “powerfulness”. 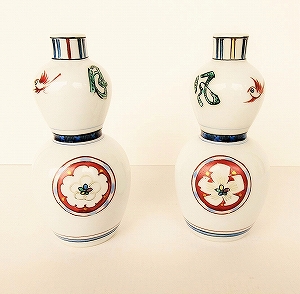 the expression of the latter;

The expression of the latter on a smooth surface with design, patterns and two characters is contrary to the aspect of the former. While drawing them in five colors including red, white space is large boldly. It is thought that this is not only to contrast the white body and the five colors, but also to make the subject of design and pattern firm and stable. It is often said that ambiguous paintings with unclear subject make viewers feel uneasy, so bold space seem to have the effect of making the subject clear. 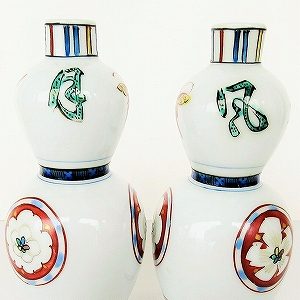 another concern of the latter

In Japan, a set of flower, bird, wind and moon (Japanese idiom 花鳥風月) is used for design of arts and crafts. Normally, “flowers and birds” can be easily painted by design, but it is difficult to express “wind and moon” (good breeze and clear moon). On this sake bottle, flowers are represented by simple patterns of some petals, and birds are drawn by themselves, but with regard to the “good breeze and clear moon”, the wind and the moon which are expressed by two characters (風 and 月) in green seem be waving in the wind. Instead of drawing the flowers by themselves, the patterns of some petals are drawn in the “full moon”. This expression seems depend on the viewer’s sensitivity. 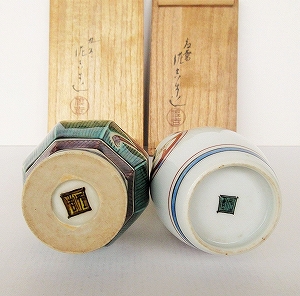 The reason for determining that these two pair of sake bottle would belong to the same creator is because the signature and seal of “Sakichi” inside the lid of each box are the same. Clearly, each aspect of two pairs of sake bottles are very different. The reason for this deference of the expression seems be hidden in characters (應需 means responding to a request) written inside the lid, and further research for the reason is still worthy.

The first Matsumoto Sakichi learned painting of porcelain from the second Matsumoto family, Matsumoto Sahei (松本佐平), and worked as one of his disciples. However, in 1908 he became an adopted child of Sahei and succeeded to Shoun-do (Sahei’s factory).

Sakichi did not use “Shoun-do” for his back name. The reason seems be difference from the painting style (called Shoun-do-style) by adoptive father Sahei. Adoptive father’s style of painting was symbolic of Meiji Kutani.

On the other hand, Sakichi was passionate about restoring Ko kutani more accurately, and even became a master of Ao kutani. It seems to be related to his respect for his father and painting style of Shoun-do.