condition ; good  no chips, no cracks

Because of the painting composition of bowl for rinsing sake cup during the banquet, the back name “Ishida tsukuru” means the name of a kutani painter, Ishida Ichigo who also worked on Japanese painting at Nomi Araya area.

The composition is different from general Meiji kutani taking the frame and window for paintings often seen in Meiji kutani, and is like to the Japanese painting seen from Edo period to Meiji. It seems be attached with strip, fan surface, or special processed paper (colored with dye or pigment using a unique technique, printed with a pattern, and decorated with gold or silver mud processing) and Picture or pattern seems be drawn on them. Its style might be more Japanese than other Meiji kutani. 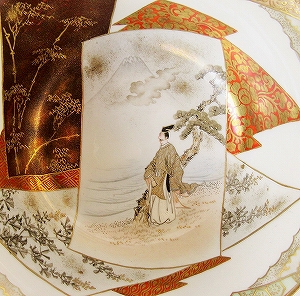 Overlapped pictures and patterns in rust and gold are drawn in mikomi (the center of bowl),.

Looking at the top picture, a figure of a solitary court noble can be seen, and he is looking under pine tree far Mt. Fuji. Probably, he is thought to be Arihara Narihira who wrote a lot of famous Waka (Japanese poetry) and appeared in Kokin Waka-shu (compositions) and Ise Story. In the story is a famous picture of looking at far Mt. Fuji.

This painting method is like to the technique of visually decorating Waka which can be too seen in the Japanese painting at that time. So, as a Japanese painter, Ishida applied that decorative technique of gold and silver mud-processed paper and strips in various forms for decorations of kutani. Probably. it might be thought that this bowl incorporated visually Waka and intended to make the painting in mikomi more decorative. 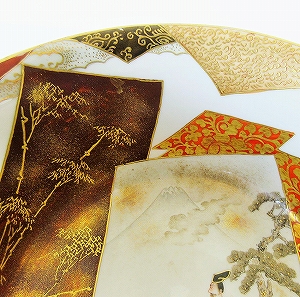 Under the strip where a court noble is drawn, a gold and silver mud processed paper is like to the same used for the cover of the Waka scroll. On the paper, supple bamboo that stretched well is drawn in gold on the brown ground. In another strip is delicately drawn with flowers. This style is one of the applications of decorations by gold and silver mud processed paper and strips in various forms. 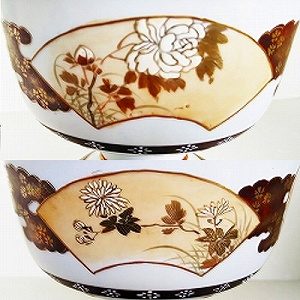 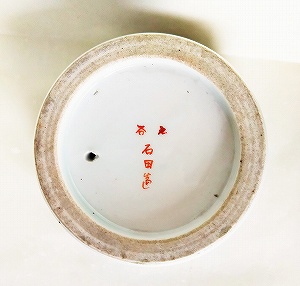 The back name is written “kutani / Ishida tsukuru (made)” inside the foot. If Ishida was asked to paint from potter merchants, usually he would write “someone tsukuru (made) / Ishida-ga (painted)”. However, he did not write so because he worked on both Japanese painting and kutani painting as independent businesses.

Ishida studied Japanese painting from Tanaka Ikka (*) in Kyoto. After, he returned to Nomi Araya, and he started engaging in Japanese painting. It is said that Meiji kutani was also at its peak at that time, so, he started also kutani painting business on request from his surrounding people.

Tanaka completed study at Kyoto Prefectural Painting School and after taught Japanese painting there. Tanaka was a well-known painter in the Kansai art world, receiving numerous awards for his full-fledged brushstrokes and color scheme. Especially he excelled in painting picture in silver mud, and published art magazine.