colored and gold platter with overhead view of Itsukushima Shrine 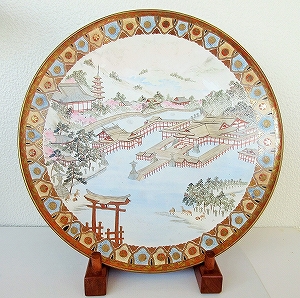 On this platter by Takada Ryozan, Itsukushima Shrine in Hiroshima Prefecture is drawn by the method of bird’s eye view.

For a long time, a lot of paintings of famous places and shrines and temples by bird’s-eye views have been inherited, also many illustrations of Itsukushima Shrine and its surroundings. It is unknown whether Takata drew the Shrine based on painting examples or after his visiting the Shrine in the latter half of the Meiji period, but the viewers will be surprised that instead of the traditional landscape painting (mountains and rivers), Takada drew by bird’s eye view “painting of famous places” of the Shrine several hundred kilometers away from Terai, Ishikawa Prefecture. 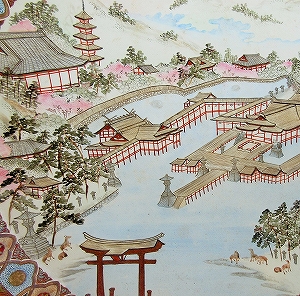 It is said that sightseeing maps were drawn by the method of bird’s-eye view since the Meiji period. On this work are drawn mainly the main Shrine, the Shrine Torii at sea, the five-storied pagoda, and other attached buildings and famous places, and herd of deer. The bird’s eye view was useful to draw their positional and perspective relationships by three-dimensional view.

Takada’s painting of Itsukushima Shrine was also influenced through his interaction with Kasama Chikusetsu and Ishida Ichigo who were familiar with Japanese paintings. He might draw the painting as real landscape painting instead of traditional picture of san-sui (mountains and rivers) like a utopia. 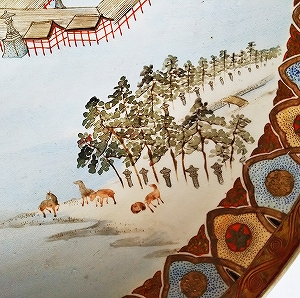 It is unknown how much tourism had spread in the latter half of the Meiji period, but it is possible that Takada also visited the site because the main railways were already laid out, so he could go to the Shrine and draw the scenery easy to overlook. 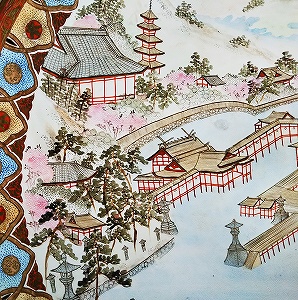 On the left side, Toyokuni Shrine and the Five-storied Pagoda, and the scenery of cherry blossoms around the Shrine are drawn as “Miyajima in spring”. The cherry blossoms are colored in white and pink, so that “tsubu” (fine pointillism) look three-dimensional.

Chrysanthemums and autumn leaves are drawn alternately on the back, so they might remind that in autumn Miyajima is also taken as famous places. These paintings and patters might guide Itsukushima Shrine and its surroundings in spring and autumn”. 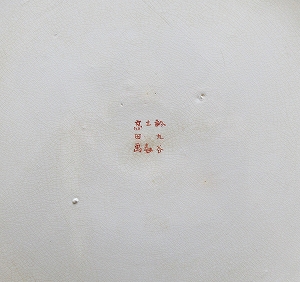 Inside the round foot, “kutani / Doi / Takada-ga (画)” is written. “kutani” means that it was made in “Ishikawa Pref.”, the place of origin of kutani. A similar example is “Kaga-kuni”. In addition, “Doi” means that this was made by supplier named Doi, a pottery merchant or manufacture at the time. But its details are unknown.

About the creator of this work, please search for “collection of Takada Ryozan’s works and his history“.