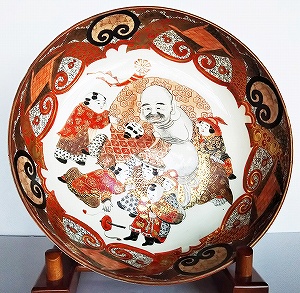 The Meiji kutani with the back name “Nishino (西埜)” or “Nishino (西野)” is not so many, and it is known that a porcelain painter called “Nishino Jintaro” was a disciples of the first Hashida Yosaburo (1851-1926) . On the basis of this fact and its style of painting, this deep bowl with the back name “Nishino-sei (西埜製)” is considered to be an article of rare beauty produced by Nishino Jintaro, so, here is introduced.

The figure of Hotei (one of Seven Lucky Gods) and karako (Chinese children) was seen from long ago in Japanese ink paintings, paintings of the Kano school, and Ukiyo-e. It seems that there is no other work that is drawn all over harmonizing Hotei and karako playing innocently.

*Watano Kichiji, a big pottery merchant, often puts the name “Watano-sei (製)” in his products, and it was said that “no (野)” and “no (埜)” had the same meaning (minor difference between new and old characters). It seems that he used “no (埜)” simply because it was easier to write and read than “no (野)”. 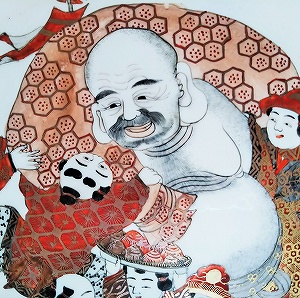 The reason that Hotei who was a real monk in China during the Chinese Tang Dynasty was added to the Seven Lucky Gods in Japan would be probably because Hotei was accepted by common people for his familiarity. The people felt familiar because he was smiling, his forehead was wide, his belly was bellowed, he was dressed in loose clothing, and he was carrying a large bag.

It was said that the large bag contained the alms from the common people, and gradually various legends began to be born. It was thought that the large bag contained a great feeling of gratitude to the people and a deep mercy that he gave to the people. In this painting Hotei’s appearance seems to represent magnanimity and well-rounded personality. 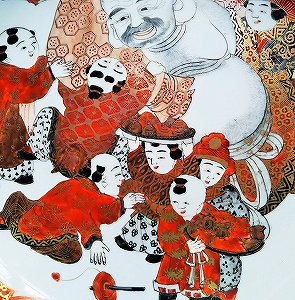 As the “karako” figure was introduced to Japan during the Tang Dynasty, the children came to be called “children of the Tang (country)” or “karako”. In particular, as shown in this painting, it was thought that drawing more boys would symbolize richness and prosperity.

Nishino hoped to make a good combination of “Hotei”, the god of richness and prosperity and child treasure, and “karako”, and this deep bowl would be a lucky charm. 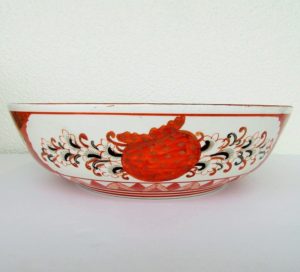 It is a nice shape of the bowl which is large and deep and has no distortion. Its shape seems to represent Hotei’s magnanimity and well-rounded personality.

According to some records, the name of ” Nishino Jintaro” remains in the Kitade kiln (later Seisen kiln) opened at Sakaedani Village, Enuma in 1868. He was recorded as a craftsman who worked there for potter’s wheel molding. From this, Nishino would work as a craftsman for a certain period in that kiln, which had a reputation for fabric production. It is possible that at some kilns lined in the mountains in Sano Village where Nishino himself was active, Nishino himself would be involved in the production of this nice deep body. 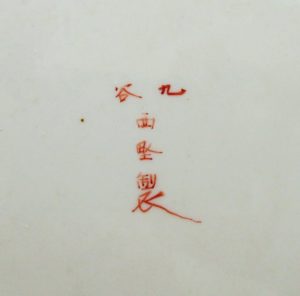 The name of “Kutani / Nishino-sei (西埜製)” is considered to be used after Nishino became independent from the first Hashida Yosaburo. He worked independently on the production of kutani. Unlike “Nishino-ga (西野画)” seen in other works which was signed as a porcelain painter, “Nishino-sei” is considered to reflect the fact that he produced and sold kutani.

creator of this work  西野仁太郎

Considering other works and the records, “Nishino” is thought to be Nishino Jintaro, a disciple of the first Hashida Yosaburo (1851-1926) who worked in Sano Village.

It is thought that Nishino Jintaro wrote “Nishino-sei (製)” in his works, which means that he made and sold kutani in Sano Village, independent from his master, Hashida. Later, Nishino served as a deputy representative of the Nomi Kutani Ceramics Industry Association’s Domestic Commerce Department (recorded in 1913), and it means that he was active in producing and selling kutani for the domestic market.