white and blue bowl with dragon and rough sea

Introduction; Because the meaning of dragon is different between Japan between the West, this description of the dragon is introduced before. 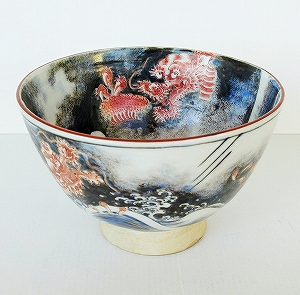 This work is one of the few works left by Shimoide Baisen. The impression received from this work is only a painting of a dragon and a rough sea on the inside and outside of the bowl, but the dragon is delicate with a red line drawing, and the rough sea is skillfully expressed with bur and shading in white and blue.

Particularly, although not painted in gold, akae fine dragon shows a small scale of the style of his master, Asai Ichimo, craftsman of red and gold fine painting. And the painting of the dragon was rare in Meiji kutani (phoenixes and peacocks were popular), and the dragon is drawn as stunning one, comparable to Suda Seika who drew a dragon and received high praise. 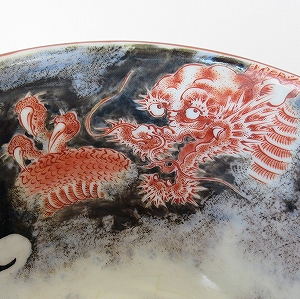 The dragon is descending from the dark sky, and the rough sea beneath it are all over on the inside and outside of the small bowl like a one-width painting. The dragon emerges in the dark by contrasting red, ultramarine and white, and seems to be approaching. 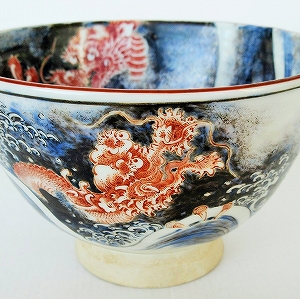 In ancient China, dragons were commonly used, and the five-claws dragon found in the “white and blue vase with dragon” (owned by the Ishikawa Prefectural Museum of Art), produced by Suda Seika (one of the master craftsmen in the Meiji and Taisho period), was said that drawing the dignified five-claws dragon was approved only by Chinese emperor.

On the other hand, Baisen’s dragon looks humorous and the viewer feels kindness in the eyes, and the dragon is gently expressed. Baisen chose a three-claws dragon allowed by the common people and gently drew it. In addition, the dragon drawn on the outside hooks three claws on the rough waves. It is a humor. 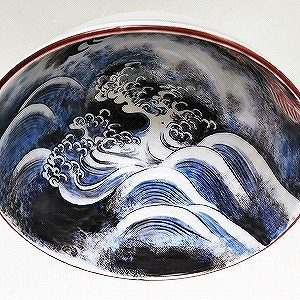 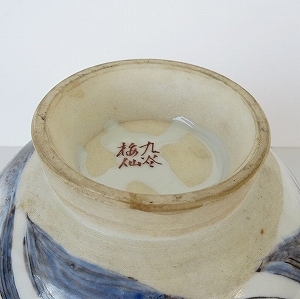 It is unusual that the round foot itself is high (deep) and slightly widespread. And no glaze is painted around the round foot. However, glaze is partially painted on the inside of the foot, and “kutani (九谷) / Baisen (梅仙)” is written on the glaze.

For three years from the age of 13 in 1902, Shimoide Baisen studied akae fine painting from Osaka Kiyotsugu under the school of Takeuchi Ginshu (elder brother of Asai Ichimo), and for four years from 1905, studied colored painting from Matsumoto Sahei. Then, Baisen became one of the few pupils who studied under Asai Ichimo in his later years.

After, he became independent in 1923, built a kiln at home, and worked hard to produce his works. He excelled in red fine paintings, and his skill in colored painting was well-known, so he was said to be one of the master craftsmen in the Meiji and the Taisho period.