introduction ; Because the meaning of dragon is different between Japan between the West, this description of the dragon is introduced before.

The dragon and the phoenix (male) are drawn precisely, and white and gilded clouds are drifting around them. Compared to Meiji kutani with the prominent red and gold, this work is less gold and the subdued red is the main color tone, making it feel calm.

If looking closely, it could be thought that he was strongly influenced by Meiji kutani’s master craftsman, Takeuchi Ginshu and succeeded in many things from him. 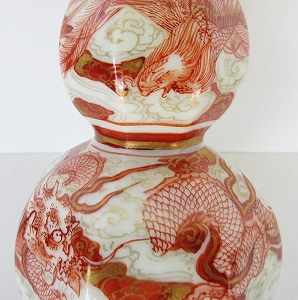 It is thought that the Chinese historical fact of dragon-like pupil and a phoenix-like neck became a motif of this work to express an extremely precious face. Even though the phoenix is flying over the dragon and phoenix’s eyes seems to be staring at the dragon, phoenix’s eyes are full of the gentleness. This expression by Shukei is skillful. 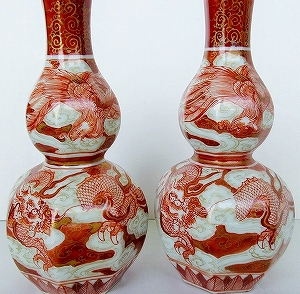 His design has momentum. It is said that Shukei drew a moving dragon and phoenix at once without looking at the sketch. So, the designs are different in details even though this works are a pair of sake bottles. 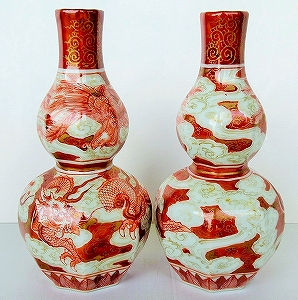 The back side is filled with white and gold zuiun (clouds showing good luck), in contrast to the front in red and gold, and the scenery of the sky where zuiun flows over is drawn all over on the back. Without forcing the dragon and phoenix to be painted on the back, the dragon and phoenix are drawn out on the front to give  momentum to the design. It seems to be more skillful. 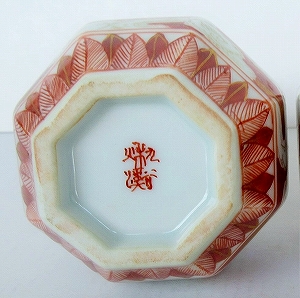 The molding of bottle is a hexagonal gourd, and the foot is also hexagonal. “kutani / Shukei” is written in red and unique typeface on the vivid white body.

Tani Shukei was born in Daishoji town in Enuma-county and studied under the master craftsman of the Meiji kutani, Takeuchi Ginshu (born 1836, dies in 1916) and his third son, Hirosawa Toshu and became one of the disciples of Takeuchi. Shukei got a charactor of “shu” from Ginshu and was called Shukei. Independently he ran a ceramic painting business in Yamashiro Village near Daishoji town.

It is said that Shukei was strongly influenced by Takeuchi Ginshu and inherited many things from Ginshu. Like this work, he left a work with elegance in a powerful brushstroke.