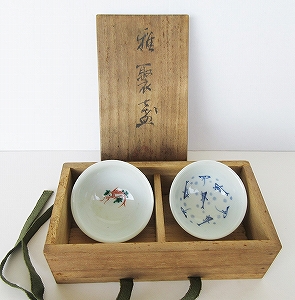 Some writing is written on the front of the special wooden box (tomo-bako 共箱). Generally, such writing means especially the creator’s description regarding to the style and quality of his work. The meaning of this writing is that the wooden box contains a pair of cups full of “elegance” or “sophistication”.

The creator of a cup in akae and a cup in white and blue is the first Yaguchi Eiju (he was called Seisei-ken), but their style tells his slightly different history (described later) than other kutani creator. Since Eiju was closely related to the urban culture of Kyoto, he brought up delicate sensibility. Because of strong influence of two men, wholly, his works have an elegant and sophisticated beauty. 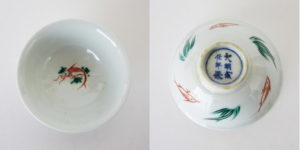 About one cup, on the pure white inside, small fish and aquatic plants are drawn in brightly red and green, and on the outside, some small fishes and aquatic plants are alternately drawn. It is completed in smalt and akae painting style like Chinese porcelain (but here using green instead of smalt). It is thought that it was strongly influenced by Takiguchi Kazen, one of the best disciples of Eiraku Wazen, who was a specialty of smalt akae, so, the elegant, sophisticated design of Kyoto is expressed on this cup.

Clear, small fishes swimming between the aquatic plants are looked on the inside. Looking at the flow of the river, Eiju seemed to try expression of the inside of water, and in this painting a sense of elegance is felt to be different from kutani in the Meiji and Taisho period. 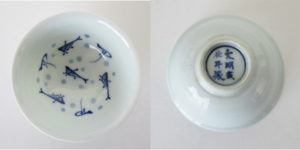 About another cup, some small fishes and swinging water plants are drawn inside in white and blue, and it is felt that the drawing is delicate and the movement is sensitive.

It is said that the Eiju kiln had an excellent potter called Tozaki Kanzaburo who trained in Kyoto and after produced excellent white and blue works at the kiln. He himself sold his works in Japan. It is thought that this work was influenced by him. 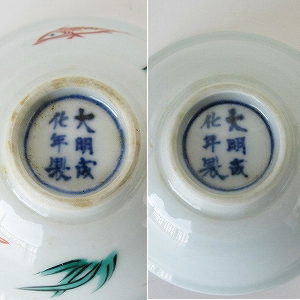 The first Yaguchi Eiju (he was called Seisei-ken) was an innate dexterous person who was familiar with ceramics, calligraphy and antiques. When he was young, he went to Osaka, traveled around the country, and after returned home. He started to create raku-yaki called Kurotani-yaki. In 1904, Eiju invited Takiguchi Kazen, one of the best disciples of Eiraku Wazen, and opened the Eiju kiln and began making Kyoto-style ceramics.

However, it was said that Eiju himself did not touch the potter’s clay and did not take a paintbrush, so he gathered many artists (potters and painters) from Kyoto, Nomi, and Kanazawa, and produced the works, showing his taste and improving the quality. Finally, he came to be called a master craftsman of kutani.