gold and colors, a set of three bowls with shochikubai 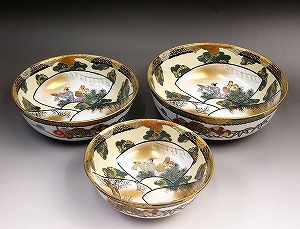 In Meiji Kutani, a set of three bowls are often seen, as are 19 sets in the pictorial records “Keisei Collection”, published by the Kesei Museum of Art. At the banquet and the like, three different kinds of foods were served in three bowls, and each bowl was turned in turn, and people on the spot ate three kinds of foods on the small dishes. Particularly this custom was created and a set of three bowls were gifted for celebration and commemoration. according to these bowls, they were decorated with prominent paintings or patterns in gold and various colors. 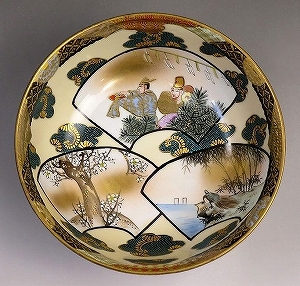 In the inside of each bowl, the combination painting of shochikubai (松竹梅 sho (pine) -chiku (bamboo)-bai (plum) is drawn with the size changed little by little. It is painted with delicate brushes and various colors, and many parts are decorated by the technique of mori-kin (盛金gold painted over other paints, see below table). Originally, in China, shochikubai were favored by intellectuals because pine and bamboo do not fade in the cold, and plums blossom in the cold. It was considered in Japan that after the Edo period, shochikubai showed “prominence” and became popular in the rich people. So, the combination painting was often painted on ceramics, lacquerware, and dyeing and weaving for elebration. 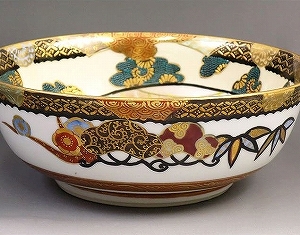 In addition, the combination painting of shochikubai was converted into a combination pattern of shochikubai. In the Edo period, shochikubai became widely used for not only costumes but also festive furoshiki (wrapping cloth), wedding futons (beddings), furniture etc.as a representative of the auspicious patterns.

In these bowls, too, as a celebration pattern, the combination pattern is used for a decoration unique to Yuzan because of mori-kin (see below table), beautiful coloring and fine drawing. 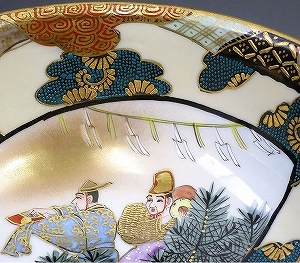 * techniques used for these bowls 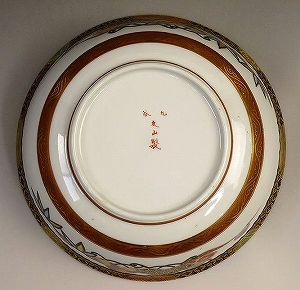 It is written simply as “kutani / made by Yuzan” on the back. Although his other work has also the back name “Yuzan-do (友山堂)”. After studying at the painting factory “Ijun-sha” in Kanazawa, he begun independent production. It seems that he started using “made by Yuzan” and “Yuzan-do”.

Sasada Yuzan started studying pottery painting from a young age, opened a painting factory at the age of 32 in 1872, and specialized in the painting business. Later, in 1878, he closed the factory, and after retraining at Ijun-sha, he became independent and resumed the pottery business.

It is said that many of Yuzan’s works were well decorated with gold, following Shimizu Bizan who developed the technique of mori-kin in 1882. It is interesting that as in 1877 Nomura Zenkichi began to write fine calligraphy on the inside of teacup, Yuzan, Shimizu Seikan, Akamaru Setsuzan, Hatta Itsuzan and others followed Nomura.

Yuzan had excellent painters such as Takeuchi Yasuhisa and Hatta Itsuzan among his disciples.