colored and gold, plate with shitifukujin, flowers and birds 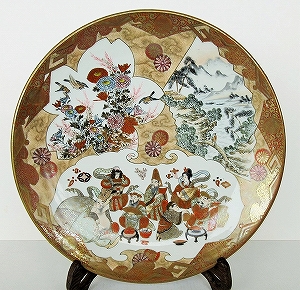 This work is considered to be a work by Nakano Chuji, who was trained in Kutani Shoza’s Factory, because of the style and skillfulness of painting.

Kutani Shoza (1818-1883) had many disciples, and his central disciples were the first Takekoshi Zenbei, Nakagawa Jisaku, Kosaka Isouemon, Kasama Yaichiro, and Nakano Chuji, who were called master craftsmen afterwards. It is said that they helped and supported Kutani Shoza in order to widen and develop the Shoza style.

This work just received much incense from Shoza in the first half of the Meiji period, the flowers and birds, the landscape, the shichifukujin (*1), etc. were drawn on the front, and the yonkunshi (*2) were drawn on the back. All designs seem to be just Japanese painting, using various neutral colors obtained by the method of blending Japanese and Western paints started by Shoza.

(*1) In Japanese mythology, the Seven Lucky Gods or Seven Gods of Fortune (七福神 in Japanese) are believed to grant good luck. They all began as impersonal gods, but gradually became much closer canonical figures for certain professions and Japanese art.

(*2) As the Four Gentlemen (四君子in Japanese) represent the four different seasons, the four are used to draw the unfolding of the seasons through the year, or the four are a recurring theme for their symbolism of uprightness, purity, humility, perseverance against harsh conditions. 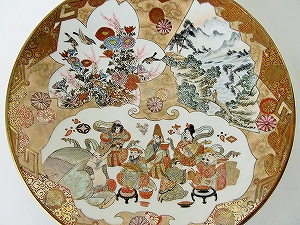 The front painting uses a technique called wari-tori (panels like framed board for drawing), that are said to be begun by Shoza. In the center panel, the Seven Lucky Gods is drawn, often incorporated as a motif in Meiji kutani. It is painted in red, gray, gold and silver. In the left panel is flowers and birds painting like a sketch-style, and in the right panel is a landscape painting that looks like ink painting. Around them, various patterns are decorated in brocade painting and ishime-uchi (the style of filling the background of flowers and birds, and landscapes with fine dots).

In particular, the painting of flowers and birds is painted in improved neutral colors such as red, pink, grey, brown, flesh color, and light blue, and is slightly decorated with gold and silver. In this way, figures, flowers and birds, and landscapes are beautifully and naturally finished. 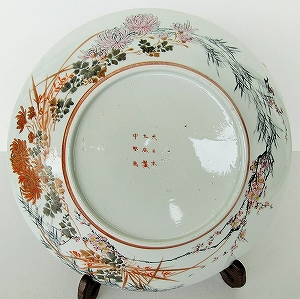 What is surprising in this work is that the Four Gentlemen which usually have been as a main motif in artistic creation、is drawn all over on the back hard to see. Orchids in spring, bamboo in summer, chrysanthemums in autumn, and plums in winter, which are often used as motifs for handicrafts in Japan. They are wonderfully covered on the back.

Considering the painting style described above, this work also features gorgeous exports of kutani, that incorporated much element of Japanese painting required from Europe and the United States both in front and back. 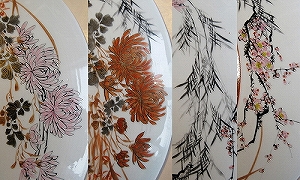 If looking closely, the four kinds of plants, orchid, bamboo, chrysanthemum, and plum are carefully drawn one by one, but they are united as a design, so, the back printing alone is worth seeing, and the luxurious feeling of this work is given to the viewer.

The neutral colors are too much used in a well-balance, highlighting the dignified beauty of each plant. Expressing the beauty of nature, they are exquisitely refined, beautifully finished. It seems that each line and each point was breathtakingly drawn with all his energy. 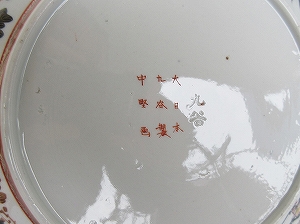 The name “dai-Nihon (大日本) / kutani / Nakano-ga (画)” is written on the back, and the stamp “Kutani” is stamped near the name. Many of the Meiji kutani, which the country of origin “Japan” was required to write in, were exports of the Meiji kutani. The exports were gorgeously colored, and detailed, and “Dainihon / made by kutani” was written on the back of it. Considering the way of these back names, this work might be produced as the exports of kutani.

His history as a master craftsman has been understood a little.

The work with the back name “Nakano” (中埜 in Jaoanese) is a few, but with reference to other Meiji kutani and other materials, Nakano followed the Shoza-style and developed it as a disciple of great master craftsman Kutani Shoza. It is considered that this work is a work by Nakano.

Looking at this work, the gold color is more modest than the works produced by Shoza factory, but it expresses the beauty of nature, and it is exquisitely refined and beautifully finished. This is just much incense received from Shoza.