colored and gold, bowl with paintings to match four seasons 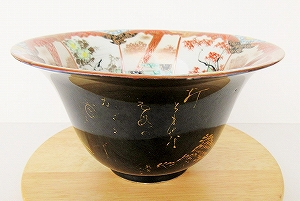 This work seems to be related to the waka (Japanese poem). In “Ishida Ichigo, colored, gold and silver, bowl with figure” descripted previously, the relating with the waka and painting had been handed down to visually decorate the waka. On the outside of this bowl two waka are written in gold, and inside the bowl paintings of four seasons related with these themes are drawn elaborately.

In the Edo period, the way of paintings on folding screen or shoji to match the theme of waka had been handed down from the Heian period (794-1192) and became generally popular. Ogata Kenzan (1663-1743) wrote twelve wakas of flowers and birds on the blue-painted backs of twelve square dishes as if drawing on colored paper and painted on the surface to express the meaning of the waka.

Also in this bowl, two wakas are written smooth on the black outside and the sceneries (seasonal things or natural features) of the four seasons such as flowers, birds, plants, and features are painted on the inside. Both sides of this bowl seem to express the changing seasons. Such a composition seems to be very rare in Meiji kutani. 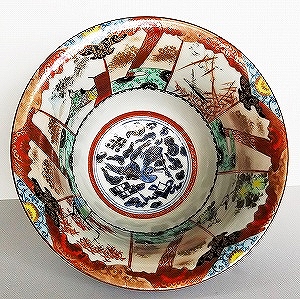 A crane and good luck patterns are drawn in blue and white on the inside bottom, and the inside side is divided into eight panels. The four of eight panels show four sceneries of each season, and two sceneries of the spring-summer and two sceneries of autumn-winter are drawn facing each other, that is, an ugly on plums trees for spring, cloth-hanging furniture (*) for summer, autumn leaves for autumn, and dead reeds for winter. In the other four panels are flowers and patterns (like pine tree) in gold brocade, and good-signed cloud. These are also colorful and elaborate.

(*) Cloth-hanging furniture is one on which the kimono is hung. As it is drawn together with the kimono, this scenery represents the early summer scenery which mean changing clothes. It is very unusual that this furniture itself is drawn. 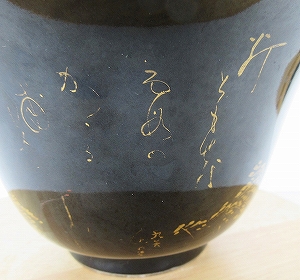 The outside of this work is painted in black with two wakas in gold, a pine tree painted in gold, and the back name “Kutani / Kamiide” which is likely to be overlooked. The two wakas written on the outside, which are hard to understand, and seem to be related to the changing seasons. In this way, the two wakas and the four-season sceneries seem to form a whole theme. This formation seems to resemble the twelve colored dishes by Kenzan mentioned above. 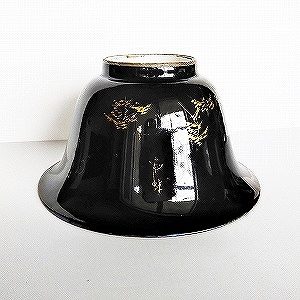 The shape of this bowl is called a “kabuto hachi” because this bowl looks like a helmet for samurai general when it is turned down, and it is similar to the helmet bowl of the Yoshida-ya kiln that was built in the late Edo period. In early Meiji period, there were some kilns (Okura kiln, Kitade kiln etc.) specializing in the body for porcelain in the Enuma county, where Kitade started the painting business, and their molding were well-received, and they got many orders from master craftsmen in Kanazawa. Indeed, this body is molded thinner toward the outer edge, the foot (kodai) is slightly high, and its shape looks beautiful and splendid. 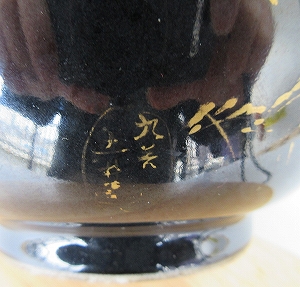 Under one waka written on the outside, the gold character that seems to have been rubbed and thinned by hand for many years is written as “Kutani Kamiide”. He used “kutani Kamiide” for the back name. So the name of “Kitade Kizan (上出 喜山)” known to the world is for the third Kitade, and he gained a reputation for its motifs such as gilded and brocade hands.

Kamide Kizan, who was called the “first Kamiide Kizan,” was born as a child of a farmer in Sakaeya Village, Enuma-gun. When he was young, he was sick and entered the path of painting business without inheriting family business.

He learned painting from Hori Bunkin and Kojima Shunko (Kamide was an apprentice of Takeuchi Ginshu and Asai Ichimo). Kamide started painting business in 1870. It is said that this is the beginning of the “Kamide” family.

The first Kitade made colored paintings better than akae and gold or brocade.