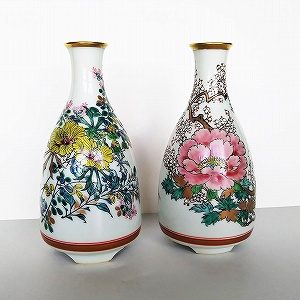 In Japan, the expression of “being likened to something” had been taken in various fields, also designs and patterns that were likened to auspicious sign and historical facts were incorporated into Meiji kutani.

These two sake bottles seem be “likened to something”. When the creator wanted to express something, he was going to draw another instead of painting it as it is. He chose the representative flowers of “peony” and “furong” and wanted to represent “spring and autumn” together.

Both were popular among various people. It is thought that the meaning was easy for people to understand based on the two flowers. Furthermore, as the meaning of the painting is guessed, it is gorgeous and decorative, so it is imagined that this pair of sake bottles was a celebration as a gift suitable for long marriage anniversary. 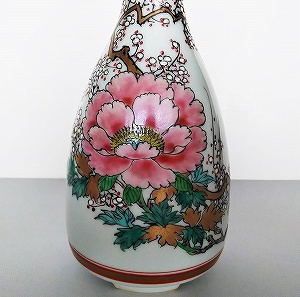 Peony is a beautiful flower of rich red, white and purple around April and May, so it looks like multiple layers of silk cloth, and it is characterized by the appearance of elegant flowers. From that figure, it has a masculine meaning such as “the appearance of a king”, “wealth and rank”, or “noble”.

Furong means the seasonal language for the fall season. The five-petaled flower opens and blooms softly, but because it is a day flower, its ephemeral nature has been used long as an illustration of a beautiful woman. It looks like a beautiful woman and furong has been likened to “beautful life.”

In addition to kutani gosai, neutral colors are used for painting furong, so all the flowers including hagi (Japanese bush clover) and bellflower are drawn delicately and beautifully. 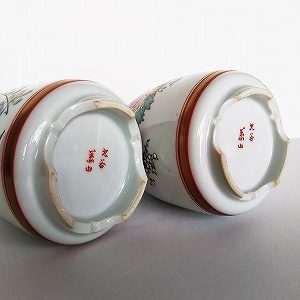 It is said that the devised foot (kodai) had the effect of giving novelty to the work, and various shapes of foot were born. So, the foots of these works are called a “three-footed”, pasting a little conical foots finished with a decorative design. 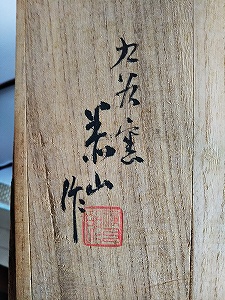 “kutani kiln / Taizan” is written on the lid of dedicated box, but other names such as “kutani Taizan-zo” are also seen. It is thought that this “Taizan” means the first Taizan. He opened “Taizan kiln” and it has been inherited by sons and disciples. But the third Taizan Takekoshi Toshiaki and the fourth Takeshi Jun have each back name different from the name of the first.

Since his early days, Takekoshi Taizan learned severely pottery in general from his father Zenbei who was a first pupil of Kutani Shoza and called master of kutani painting.

From the painting style of Taizan, the softness and depth of the Shozan style could be felt, and the fineness would be transmitted from his father’s hand painting. Taizan was a master craftsman who was skilled in delicate hand painting of flowers and birds, landscapes, and people, sometimes using techniques such as akae (red painting) and gilding, also using Japanese and Western paints, etc.