red and gold three-footed bowl with peony and bird 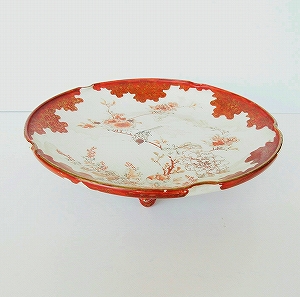 This bowl (shallow) has a sense of dynamism. The painting on the bowl that a single bird perched on a branch with its head down is overlooking a large peony. The color of the keynote is red, and partially is gold, and the bowl is decorated using techniques such as ishime-uchi (*) and brocade. Because of three foots, this bowl looks solid and dignified.

* the style of filling the background of flowers and birds, and landscapes with fine dots

If looking closely at the painting on the bowl, the large peony flower, which means “wealth and rank” or “the appearance of a king”, is drawn in red and white, and the blooming peonies are extending up, while a bird that seems to be a sparrow is placed in the center and serves as an accent.

In composition, a flower-and-bird design was incorporated in many Meiji kutani. However, the design of this bowl is somewhat different from the government-made flower-and-bird design seen in the early Meiji period. When export of the arts and crafts to Europe and the United States started, even Meiji kutani, designs that filled with the beauty and art of Japanese painting were required, and master craftsmen of Meiji kutani had to follow the government-made design examples. But, from the middle of the Meiji period, a unique effort began to be moving away from such government-made designs.

In this bowl, the uniqueness can be seen in an active small bird that is placed in the center without drawing peacocks, phoenixes, etc. that were usually attached to the peony, while painting the whole in red and adding accents with gold. 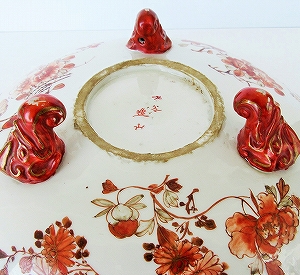 Another interesting thing is that this bowl has three foots. Since ancient times, three-footed vessels have been found as incense burners in Buddhist utensils, and in Meiji kutani can be seen incense burners, vases, etc. with foots like Chinese boys and head of beast to give decorativeness 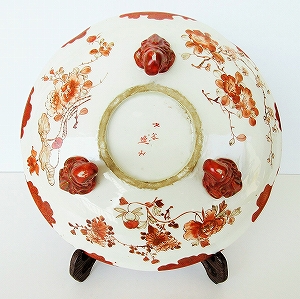 Bright flowers are also drawn on the back. Even if a feeling of strangeness with three foots, the appearance of the three flowers is drawn firmly with a slightly thicker line than the fineness in the front.

This bowl is thicker and heavier than a bowl of similar size. Rather than being heavier because of three foots, it is a sign that the bowl itself is made to be heavy and finished in a dignified vessel (like a figurine). 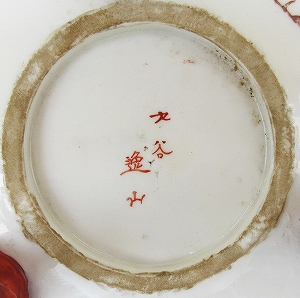 Because this bowl has no round foot (kodai), the center is slightly dented, and “kutani / Itsuzan” is writen. In the middle of the Meiji period, the back names of pottery merchants, “dai-Nihon kutani” and “kutani (manufactured)”, which represent the origin of production, were generalized, and the signature of a master craftsman was reduced.

This web-gallery has a cup with “kutani / Marunaka-made / Itsuzan-ga (painted)”. It is rare that the name of Itsuzan is written along with great pottery merchant Marunaka Magoji, so it shows that he was famous as a painter.

About creator of this work

please see “collection with the name “Itsuzan 逸山” and his history”