red and gold plate with poultry cage and flowers

condition not so good 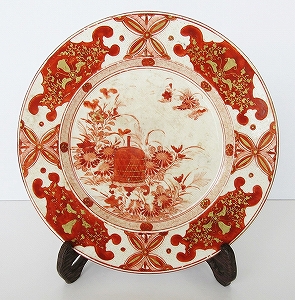 Around the poultry cage (a cage for holding poultry in the garden), the flowers bloom is drawn. Everyone feel relaxed in the scenery that could be seen anywhere at that time. It may seem doubtful for a moment whether it may be a work of Haruna Shigeharu (described later) who exhibited at the Expo.

However, the work is truly by a master craftsman who painted fine patterns of cloisonne and others on the wide edge.

Inspired by the fact that Kutani Shoza created many works that well portrayed the scenery of rural areas, other master craftsmen of Meiji kutani created works with such motifs for the domestic market. The master craftsmen created even domestic works that elaborately painted a calm scene in brocade and red. It was Meiji kuatani. 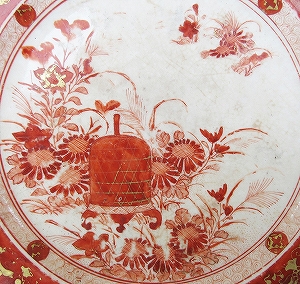 Wholly the red color stands out, and the design is brilliantly expressed like Meiji kutani because of the use of gold and brocade. The center of the plate is elaborately painted in red and gold (although gold is peeled off by rubbing). No poultry is found in the cage or the garden, but it is a good expression of the home garden, where poultry was usually kept in the garden. 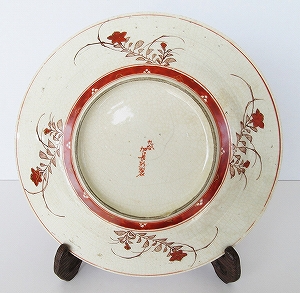 The back side of the plate has many hollows and is thick and rugged, and the flowers are drawn with a rough feeling. It seems a little regrettable, unlike the works by Haruna in the pictorial records. Without confirmation, it seems to be an early work in material and molding. 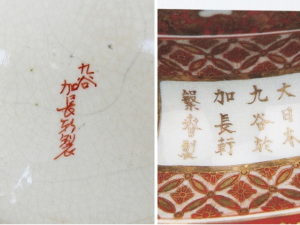 In Meiji kutani, the name “XX製” means that the work was made by a painter himself or a factory run by a painter, or a pottery merchant, and “XX画” was painted by a painter. These show clearly who made it or who painted it.

As shown in the image (left), “Kacho-ken” is written inside the kodai of this work, and this name is also seen in the pictorial records “Keisei Collection” and it is only one example of a masterpiece with “Kacho-ken Shigeharu”.

Many of the works created by Haruna have the trade name “Eisei-do（栄生堂）”, and it is unknown whether or not “Kachoken” was usually another back name of Haruna.

Since 1890, he continued to create many excellent works as one of painters at the kiln managed by Marunaka Magoji, one of which is a 70cm of large brocade vase with decoration like ear.

Haruna was as well-known as Utsumi Yoshizo who was called as one of the master craftsmen of Kanazawa Kutani in the early Meiji period. Haruna had many disciples who created masterpieces later.

Around 1882, he left Kanazawa and then brodened his career. First, he went to Yokohama and worked on painting in Satsuma ware-style called as Yokohama ware. In 1889, he was invited to the Tokyo Polytechnic as a model technician and worked at the Tokyo Higher Technical College until 1902. During this time, he assisted Gottfried Wagner’s Asahi ware (famous for using the underglaze technique developed by Wagner). And he published a design magazine (unknown).

After that, he moved to Kyoto, and produced works at the ceramics laboratory under Fujie Eiko (ceramics engineer of the Meiji and Taisho period). Then he was invited from 9th Kinkozan as a design teacher. It is said that Haruna was involved in the production of decoratively colored porcelain, as Kinkozan was exporting color porcelain.