red and gold plate with “peony and sparrow” 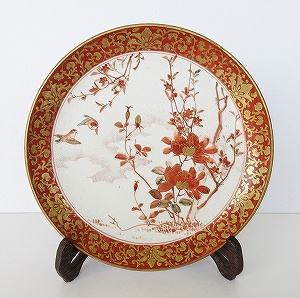 A design of “peony and sparrow” in which two sparrows fly around peonies is drawn in red on the front side, and on the background good signs are expressed by a technique that fills the space with fine dots, which was popular around the Meiji 10th year. The edge of the plate is decorated more brilliantly with a connecting piece of grass painted in gold brocade. A majesty can be felt from this work in the whole. 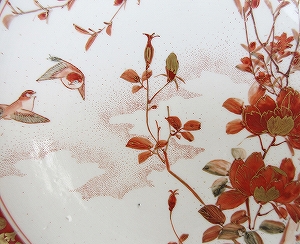 In contrast to the composition that expresses the strength of peony, which shows that the branches grow up and the tip of the branch hangs down, and though a little fading, the gold veins of peony are drawn by fine brushstrokes.

The design “peony and sparrow” became a motif of Japanese painting and was drawn by a famous painter in the Edo period. For example, a work by Kiyohara Setsushin was inherited, who was a female painter with her father Kusumi Morikage, and an excellent painter Ito Jakuchu also drew a painting of “peony and sparrow”.

The motif of Utsumi Kichizo’s design might be based on design collections “Onchi-zuroku”, which was compiled by the Meiji government (presided by Notomi Kaijiro) based on Japanese paintings and crafts, collected by leading painters of the Kano school and designers at the time. The Meiji government compiled the collections several times and distributed them to the production areas and master craftsmen of arts and crafts to exhibit at the Expo. Kichizo also exhibited at the Paris Expo in 1878. 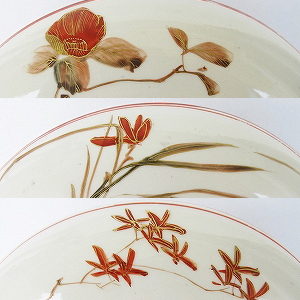 In contrast to the front side painted in red or gold, the back side is a colored painting style, rather than drawing finely, it is as if sketching what someone saw as it was, leaving the red or gold painting and returning to the original artist. Duality of painting styles in the front and back side of plate can be seen sometimes in the Meiji kutani. 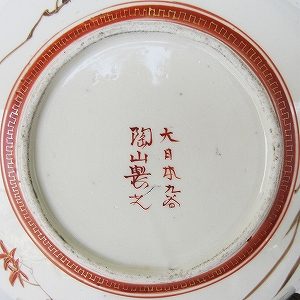 It is said that Utsumi Kichizo called another name “Shorei-do Tozan”, but he wrote “Dainippon Kutani / Tozan made” in the back name of this work. In addition, many works that have “Utsumi Kichizo” are inherited.

Generally, the name “Dainippon Kutani” was written in the Meiji kutani exported to Europe and America. So, it is guessed that this work was also an exported kutani. Since Utsumi Kitizo exhibited at the Paris World Expo, it is considered that he produced this work for export after gaining favorable reception at the World Expo.

Utsumi Kichizo had a porcelain painter Nabeya Josuke in his grandfather, who was active in the Yoshidaya kiln at Revival Kutani, and a porcelain painter Nabeya Kichibei in his father, who was active as a red painter at the Minzan kiln. He studied red painting and gold, also learned painting from Kano school painter Sasaki Senryu.

(*) Sasaki Senryu was born in Daisho-ji in 1773 and was a painter of the Kano school who was active from the late Edo period to the end of the Edo period. He did a lot of work at the request of the Kaga Domain.

Utsumi Kichizo started his pottery activities from the end of Edo period, and he painted at the late Ono kiln. In 1867, the Kaga domain established a self-managed kiln in Kanazawa, and he worked at the kiln with a porcelain painter Toda Tokuji.

In 1869, along with an entrepreneur Abe Hekikai, he established the Abe Hekikai kiln and became the manager of the painting factory. In 1891, he succeeded to this factory, then established a painting factory Ijun-sha (described later). Through this factory, many master craftsmen, such as Iwanami Gyokuzan, Haruna Shigeharu, Yagi Jinsakui, etc. were sent out to the world of kutani.

From such his history of painter, it is considered that he was one of the master craftsmen who laid the foundations of Kanazawa kutani in the early Meiji period.

Kichizo expected orders from Kanazawa pottery merchants such as Marunaka Magoji, Matsukan Store, Kaburagi Shore, Taniguchi Kinyo-do, which were wholesalers of Abe Hekikai Kiln, also gathered many master craftsmen. This factory sent the excellent products in and out.

This painting factory mainly painted export products, and this factory was a famous one alongside Fujioka Ganka-do because the products was beautiful and elaborate in the Meiji period.

In particular, this factory completed the design style of Hyakuro-de, which was devised by Saite Isaburo, made the products with this style for inside and out, and became the representative style of this factory. In this style, innumerable small Tang people are arranged side by side, the patterns of clothes are variously colored with Western paint, and gold lines are added. For its sophistication and finish, the factory won more acclaim than other kutani at that time.