condition: no scratches, no cracks and no repairs 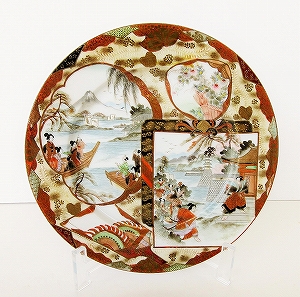 This 6-sun dish is finished with transcendence, for example, painting by mori-kin and shiro-mori (see below), and the technique of miniature paintings.

The figure of people who seem to be men and women of the Edo period are drawn in two different panels, and in another panel, flowers drawn by a different style (like Shounku-do style). It is painted in detail and decorated with gold, brocade, mori-kin and shiro-mori (see below), so the medium dish has delicate pictures drawn like the large plate and large vase of Meiji kutani. 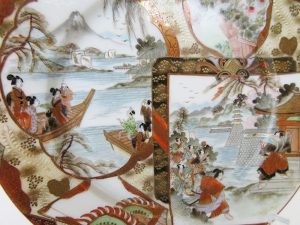 The paintings seem be illustration in the story that flourished during the Meiji period. In the square-shaped panel the paintings of a samurai who has something in his hand, facing another samurai, and many samurais (either servants) who watch over two samurais are is finely carefully drawn.

On the other hand, another panel shows the women boarding on a boat, looking back at Mt. Fuji and returning to a pier, and the appearance of the pier. They are full of rich expressions.

The two panels with samurai kimono in gold, fine stone-wall of castle like continuous turtle shells, thatched roof shining in mori-kin, pine tree and willow branches in mori-kin and so on are drawn finely.

The technique of mori-kin, which shows the high level of technology at that time, is being used everywhere.

Mori-kin is a technique that was started by Shimizu Bizan in 1882. It is completed through a process of painting patterns on the base body, baking it, repeating them several times, then forming each pattern, and painting hon-kin (*) over the patterns with convex.

A high level of technical skill was required for this technique. The mori-kin is found on pine tree branches, thatched roofs, and patterns around black panel.

(*) hon-kin is a type of paint that has a high content of gold among gold-baked paints. Baking temperature is 700-850 degrees. It is thicker than cheap mizu-kin (gold dissolved in a solvent), so it was used for permanent decoration. 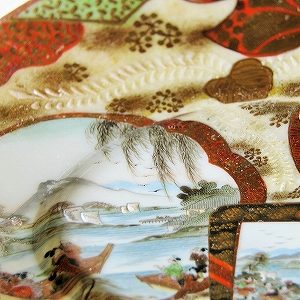 Another is that the technique of shiro-mori (which sometimes refers to the white “color paint” itself) is used to express the convex of the white paint.

In this work, shiro-mori is used for the whiteness such as swelling of sails and the backside of fern (it means congratulations for longevity and prosperity of the family). They have a good contrast by shiro-mori. 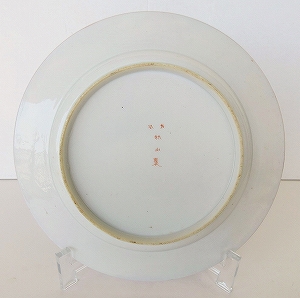 This dish has no paintings in the back side. It seems that it was common in the middle plate (dish), compared to big plate that was gorgeous or decorated. It is thought that the creator could concentrate on carefully painting the surface.

The back name “kutani / made by Akiyama” is written inside the foot of this work. We can see also “Akiyama-do” and “Akiyama Komajiro Shoten (store)”. (see below)

About the creator of this work, please search for “collection by Akiyama Komajiro and his history”.