gold brocade plate with a peony and other flowers

condition  the plate has a thin part in gold and some scratches on the back. 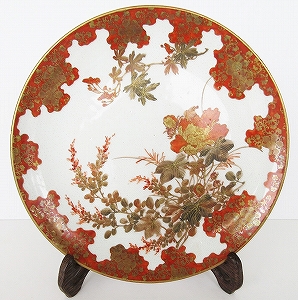 “A peony and other flowers” is finely drawn on the center by gold brocade, and the edges are also decorated with patterns. In the background of the flowers, the technique of filling the blanks with fine dots (stone pattern) can be seen.

The composition is very similar to his master Utsumi Kichizo’s “gold brocade plate with a peony and sparrows” (already explained), and this work is also an example of the painting style in the early Meiji period. 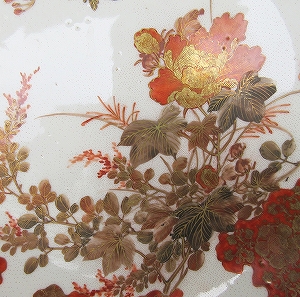 Under the branch that hangs from above, a large peony flower and other flowers around it are drawn. Characteristically, the veins are finely painted in gold on the ground where the leaves are colored in black or dark gray. This style of painting makes akae stand out and gives a calm feeling, and it seems to be innovative in the work of the early Meiji period, when akae was predominant. 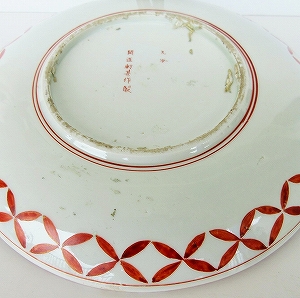 Based on its meaning, the cloisonne patterns was drawn to reflect the feelings of the creator who cherished the relationships and connections of the people who he met in Kanazawa and Ao Village. It seems to be a meaningful pattern in combination with the factory name “Kaisho-ken” (described later). 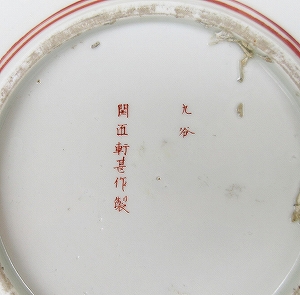 The back name “Kaisho-ken” is written in the back. It is said that this factory name was named after training in Kanazawa and returning to Ao Village in Nomi. This shows the enthusiasm of Yagi, who wanted to cultivate craftsmen through opening the factory (door) to them and providing his skill for teaching them.

Yagi studied porcelain paintings from Ichikawa Kaemon in Ao Village when he was 15 years old (1863), and later went to Kanazawa to research the improvement of his painting style under Utsumi Kichizo and it came to be called even one of the most disciples of Utsumi. He also studied calligraphy and Japanese painting.

In 1873, when he returned to Ayo Village (a village that existed in Nomi-gun, Ishikawa Prefecture today, Ao-town), he opened the kiln (factory) and called it Kaisho -ken.

When Yagi returned to Ao Village, he opened a kiln and cultivated a wide range of nearby potters. Therefore, after the middle of the Meiji period, it is said that the painting style in which Sano’s akae and Kanazawa-based paintings was fused spread by them.