condition  no chips or scratches, and these plate have rubbing of gold. 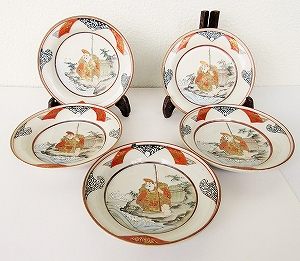 In Kutani from the Meiji period to the Taisho period, many works with the motif of Ebisu (God) can be seen. Since the prosperity of business was brought by Kitamae ships in Kaga dominion, both fishermen and merchants were influenced by the belief that Ebisu was worshiped as a god of fishing and commerce. So, both fishermen and merchants worshiped Ebisu, and Ebisu was featured on decorative plates, sake bottles, and plates (mainly, small plates for individual helpings of food) as “lucky charms”.

This work was probably created as a lucky charm, put in a matching box, and has been inherited. Ebisu’s expression on the five plates and the atmosphere received from the whole, seemed to be familiar and cherished.

Ebisu is also known for his “Ebisu face” (a facial expression with a squinting smile like an image of Ebisu God), but surprisingly, it is difficult to draw that expression, and it is said that craftsmen had a hard time to finish to look like the “Ebisu face”. It seems that the Meiji potters also studied the facial expression, and the view of carrying a fishing rod, a fish basket and the sea bream in their hands to make people feel happy.

Looking at the five “Ebisu face” drawn by Yoneda Gosaburo, the “Ebisu face” is carefully drawn, and it is interesting to look at each one. Since the whole rim  is decorated with the “treasures filling up” pattern to make it look like lucky charm, it has a more auspicious finishing. 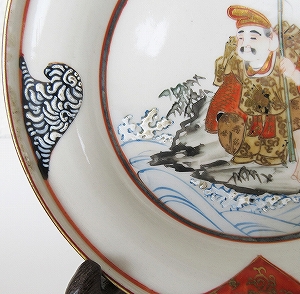 In addition to Ebisu’s design, also the three-dimensional white wave patterns come into the eyes.

The small waves that hit Ebisu’s feet are drawn by brushstrokes like oil paintings, and wave patterns are also painted on the edges of the plate with white paint.

This technique was based on white pigment “Shiro-mori” developed by Tomoda Yasukiyo in 1893 to express a white pattern in a delicate pattern and enable the expression of contrast with the color of the body or the surroundings. 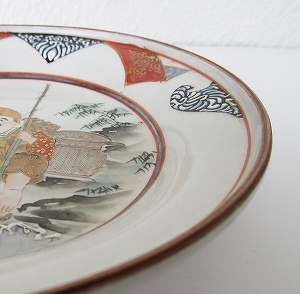 This dish, which is about 15 cm in size, has an outwardly curving rim bordered by the round line of the plane, and the edge of the rim is raised about 3 mm.

The molding is similar to that of the old kutani “two-stage bowl”, but it is a rare molding for small and medium-sized plates that were mass-produced in the Meiji period. Perhaps it came to be possible through the process of first molding an ordinary round plate and then using “embossing” to form it into the shape like “two-stage bowl”.

The molding method was adopted from the West, and it was actively used in Yahata Village, Komatsu City since about 1872. Yoneda knew how to mold figurines and mass-produced bodies, so it can be considered that “embossing” was applied to this molding. 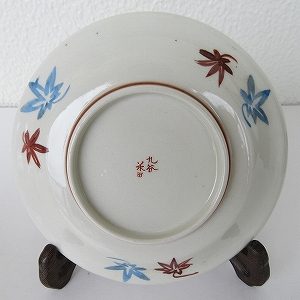 Yoneda’s names include “Kutani / Yoneda” in this work, as well as “Kutani / made by Yoneda” and “Dainippon Kutani / painted by Yoneda”.

It is believed that the first Yoneda was a pottery merchant in Neagari area, Terai Village. It is said that Yoneda was trusted by the potters in Yawata because he sold many figurines made in Yawata, which became crafts by applying unique sculptures in the early Meiji period. In addition to figurines, Yoneda expanded Kutani vase, incense burner, etc. all over the country.

In 1891, Araki Tanrei (Japanese painter), Koichi Yamamoto (painter of the Edo Rin school in the Meiji era), etc. were invited as lecturers to promote the improvement of kutani’s painting method and raise the technical level. This lecture was held because kutani had fallen into crude disorder. According to the record, it is believed that Yoneda was included among the participants, along with Kameta Sangetsu, the first Tokuda Yasukichi, etc. This suggests that Yoneda was involved in the production of kutani about in 1877. In 1907 Yoneda founded Yoneda Tohko-do and now continues to manufacture and sell kutani.

Yoneda Toko-do was founded in 1907 and now they are actually manufacturing and selling kutani .

Kutani figurines, vases, incense burners, etc. that were crafted by applying unique sculptures were manufactured and spread throughout Japan as ornaments and practical items. Under such circumstances, Yoneda Tohko-do was founded and now continues its business as a kiln specialized in ornaments.