While almost the master craftsmen of the early Meiji period created gorgeous masterpieces, Kameta gave this small pieces the same skill and enthusiasm as the masterpiece. 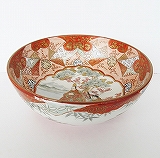 An elegant Kyoto-style noble is looking into the distance under a pine tree with thick trunk is drawn with a variety of paints on a white base.

Kameda Sangetsu became one of the disciples of Saita Isaburo at the age of 11 in 1854 and studied mainly in red paintings (akae), and in 1862 he started his own pottery business. He called Sangetsu.

After becoming independent, he continued to study under Isaburo as a porcelain painter. From around 1875, as one of the successors of the late Isaburo, he established “the 15th Day Meeting Of Sano Painting” opened on the 15th day of every month with the first Hashida Yosaburo and others, and had a “competition meeting” for their works. By discussing each research, he tried to develop the next generation. Above all, Kameta put a lot of effort into the research of pigments such as vermilion, which was the basis of his akae paintings.

In addition to his own activity of creations, he also effoted to eliminate the crude products along with the promotion of kutani. As a part of his efforts, he encouraged the county government to invite Notomi Kaijiro, Araki Tanrei, etc. and encouraged the potters to improve their painting methods to raise their technical levels.

He was good at fine red and gold brocade paintings, and now he inherited masterpieces of Shichifukujin and Hyakurozu, but also unique works such as the portraits of Chikurin and figures in multi-colors including blue