condition   overall good but a little dirt clinging inside the foot 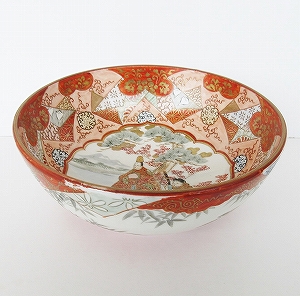 In the inside of the frame that seems to be shaped like one of the Buddhist tools, a Kyoto-style noble with his companion looking into the distance under a pine tree with thick trunk is drawn with a variety of paints on a white base. Elaborate patterns are drawn on the sides of the surrounding the frame, and on the outside of the bowl, “sparrows in bamboos” and flowers are drawn by a brushstroke that reminds of Japanese painting.

When the creator Kameta Sangetsu made use of the brushstroke which he learned from Araki Tanrei (*) when he was 44 years old in 1888 and he got the chance to build his own style. From this work, we can see multi colors paintings that was conscious of the Japanese style of painting in the Meiji period, a little away from Sano akae style built by his master Saita Isaburo.

When Araki Tanrei was 18 years old, he studied under the Kano family of the Kajibashi which inherited the Kano Tan-yu family during the Edo period. After studying the painting style of the school, he was grante  “Tanrei” at 26 years old. In 1916, he was granted to give his Kano surname by focusing his efforts on researching and reviving the Kano school throughout his life and always using the traditional Kano school brushwork.

At the age of 26, Araki Tanrei met Gottfried Wagner, a German chemist, and painted as an exclusive painter for Wagner, helping with the research and trial production of new pottery. As for the painting of pottery, the Kano school’s traditional painting method was used, and a white body was painted with multicolored paints and a glaze that did not crack after burning. It is said that the effect of Japanese painting on silk or Japanese paper was added to the porcelain.

Based on these achievements, Araki Tanrei was invited as one of the instructors to improve kutani at the Pottery Testing Center in Ishikawa Prefecture, and taught how to improve painting quality and how to paint on the improved way. The workshop was attended by the first Suda Seika, Kameta Sangetsu, Yoneda Gosaburo and other masters.

The impression that it is a little different from Meiji kutani, where red painting (ake) and gold brocade were the mainstream, derives from the reason that paintings and patterns are on a white base and drawn in many colored paints. Also, the color tone is not rich and the expression is simple.

It derived from the a movement that around 20th year of the Meiji period, there was a activity to improve the quality of the paintings on kutani at that time, and the following year, Araki Tanrei and others were invited to the pottery testing factory in Ishikawa Prefecture.

The work has the vivid colors and expresses landscape with the depth by blurring, and above all, the main theme of this work is “pine tree” which is beautifully drawn in the center of it. The Kano school continued to draw “pine tree” on the partitions or wide walls at castle or temple in the Edo period. 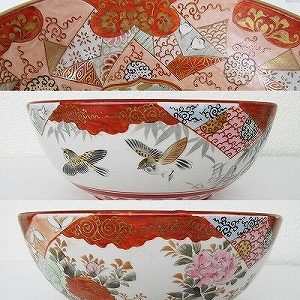 On the inside is a pattern with elegance. The folded strips are connected to form a single pattern. It is drawn in a bright color tone, especially in Kameta’s vermilion that was not seen in Kameta’s red and gold painting.

On the outer surface, the Japanese-style painting themes of “sparrow flying around a bamboo bush” and “peony flower” are drawn by a Japanese-style brushwork. The splendid drawing of the sparrow is wonderful. 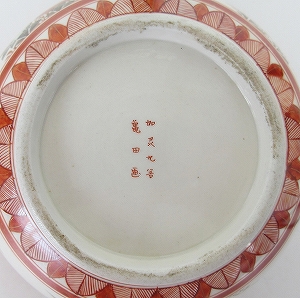 The back name is “Kaga-kutani / painted by Kameta”. However, it seems that this work was not kutani for export even if the origin “Kaga” was written. Other names such as “Dainippon kutani / Sangetsu-do” and “kutani / Sangetsu” can be seen.

About creator of the work  Kameta Sangetsu 亀多山月