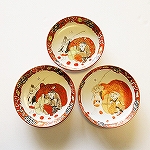 The name “Hashida-ga” is written on slightly deep dishes, but each design and body are slightly different. It is presumed that each was one of several assortments and has been inherited separately.

(2) Hashida Yosaburo, colored sake bottles with a noble man and flowers and birds 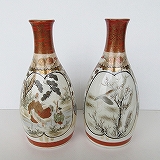 The figure of a nobleman under the pine tree and the flowers and birds are drawn in neutral colors. It seems that Hashida also created this work by incorporating the Japanese style of painting.

The first Hashida Yosaburo was born in Sano Village (now Sano Town, Nomi City). He studied porcelain painting as a trainer under Saita Isaburo for eight years, and at the end he mastered the fine red painting (akae).

In 1875, together with Kameda Sangetsu, he presided over the “Sano Painting 15th day Party”, where two people taught young painters while studying ceramic designs and pigment usage. He contributed to the foundation of the porcelain industry.

His disciples were Kitamura Yosomatsu, Nishino Jintaro, etc. and he inherited his painting style (fine red painting) to the second Hashida Yosaburo.