condition  no scratches or chips, but slight rubbing on glaze 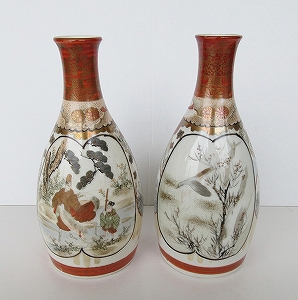 The narrow face of the bottle is filled with the panels framed by black zaffer (gosu), the figure of the nobleman on the horse resting under the pine tree, the figure of the flowers and birds, the figure of the cranes and the sailboats, which are drawn in the neutral colors. “Kameta Sangetsu, red and gold bowl with an elegant noble under a pine tree” has already been exhibited on this web gallery. Though two kutani have each shape, two have something similar to each other.

In 1891, two people Hashida and , a senior painter Kameta were taught from Araki Tanrei (Kano Tanrei), who was invited to aim for improving the painting quality and the brushwork of kutani. Since Araki focused on research and reconstruction of the Kano school throughout his life and was always a Kano school Japanese painter who used the traditional Kano school brushwork. So, it is thought that this work was created by incorporating the Japanese painting method slightly away from the red painting method “akae and gold”. 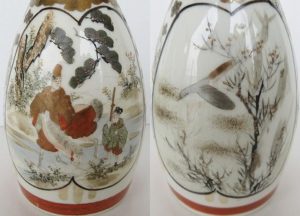 In a large panel is drawn a figure of a nobleman on a horse that is drinking water at the waterside under a pine tree. The nobleman’s appearance is graceful, on the other hand, the pine tree is like masculine and powerful. The combination of these painting styles gives the impression of the Kano school painting.

Also, on the opposite panel, a bird with long tail flying between the flowers is like breaking the silence, but any firmness is not felt. This is also a the Kano school painting. 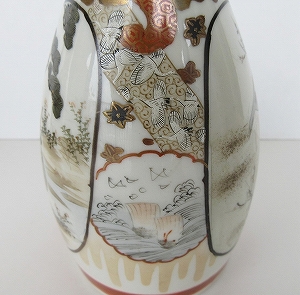 Between the two large panels, a group of cranes and sailboats in a small panel are drawn. At that time, the pair of sake bottles, sake cups, and a set of three bowls were given as commemorative items and celebration items.

Cranes are drawn in white (shiro-mori), and a scene of sailboats traveling through the calm waters is drawn. Especially, in Ishikawa Prefecture, a sailing ship (kitamae-bune) was drawn on these gifts because of kitamae-bune in the Edo period and the half of the Meiji period. This cruise freighters were not to keep the goods and transport them, but to buy and sell the agricultural and marine goods for a profit by the shipowners themselves, so they were regarded as a “treasure ship”. 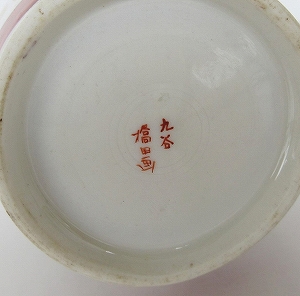 “Hashida-ga” (painted by Hashida) is written on the back. This way is the same as a senior painter Kameda Sangetsu. While two people studied porcelain painting and brushstrokes under their master Saita Isaburo, and even after their master’s death, two people worked hard on each other. It means that this work was not painted in the factory, especially it was painted by myself.

This “painted by Hashida” was used only by the first Hasida Yosaburo, but it seems that his back name was changed to “Yosaburo” from a certain time. After that, it is said that the second and the third Hashida followed the way of writing “Yosaburo” which was started by the first.

about creator of the work Hashida Yosaburo

For the creator of this work, please search for “Hashida Yosaburo 橋田与三郎” from the page “Meiji kutani masterpieces”.