red, silver and gold bowl with goldfishes in fine fishnet 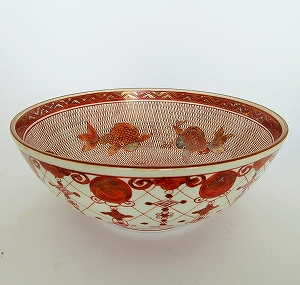 The creator of this bowl is unknown. However, from the painting style of this bowl, it seems that the porcelain painter of this bowl would be one of the painters who followed the style of Sano-akae (red painting established in Sano Village) which Saida Dokai started, and was also one of master craftsmen with excellent skill.

When looking at this bowl, the fishnet is gradually becoming finer from the edge to the center of the bowl. This detailed drawing is called “ami-no-de (fishnet style)”, and the style war of painting was created by the very few porcelain painters for the red painting of Meiji kutani.

Another is a pattern “akadama-yoraku-mon” which is wrapping around the outside of this bowl. It is a pattern mainly drawn by skillful master craftsmen of Saida Dokai’s disciples, Domoto Shichirouemon, the first Hashida Yosaburo, the first Tomita Shokaku, etc. 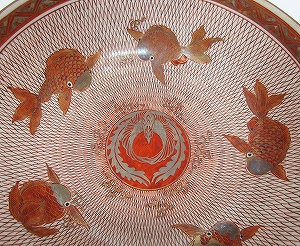 The pattern “ami-no-de (fishnet style)”, where the fishnet becomes finer and finer, seems like a gradation if looking a little away. It looks like a few goldfish are floating at the bottom of a thin fishnet. The figure of swimming, and small black eyes are also drawn cutely, and the fish scales are finely silvered and shining softly. 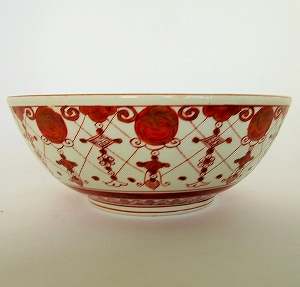 Next is the pattern “akadama-yoraku-mon” that wraps around the outer side. Akadama-mon is a red round pattern like shining sun. Akadama-mon and Yoraku-mon were drawn together because they were both auspicious patterns, but since detailed drawings was required for “yoraku-mon”, it became patterns of pottery finally in the Edo period.

Originally, an accessory worn by the royal family of ancient India on the wrists, heads and hips was called “yoraku”. In Buddhist culture it became finely decorated Buddha’s jewelry and was used as a glittering ornament that was hung down from the ceiling of the main hall.

In the Edo period, these jewelry and Buddhist ornament were made into a pattern and incorporated into the pattern of pottery. It is said that this pattern was incorporated in Sano-akae to pray for the sedation of the epidemic that was popular at the time by drawing this pattern in “red”, which had the meaning of amulet. Even today, since “akadama-yoraku-mon”, which is a combination of the akadama-mon and yoraku-mon, was celebrated as the auspicious pattern, this pattern is used for one of the patterns of kutani, adding a glitz. 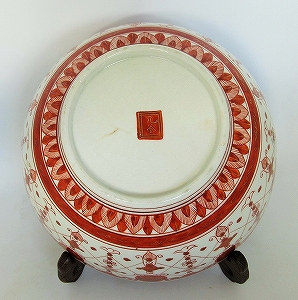 The back name on this work is “Kutani” written in red inside the foot.

There are many ways to write into a back name in Meiji kutani, and porcelain painters in the late Edo period, such as Kutani Shoza, did not put their own names inside the foot, but only wrote “kutani” and “fuku”. Looking at some catalogs, it was the same for Saida Dokai who started “fishnet-no-de”. After that, their disciple of great master craftsmen started to write their own names or factories name, and the above-mentioned disciples of Saida were the same. 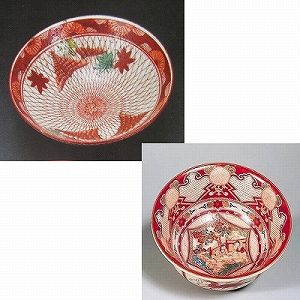 “Miyamotoya-kiln, bowl with fishnet and goldfish figure” is written on the rid of a box containing this work, but looking at the above image, it is clear that this bowl has a different style from Miyamotoya-kiln’s works. The upper left is the “a set of red sake cups with fishnet and Autumn leaves ” by Saida Dokai (source: Nomi City Kutani museum published exhibition catalog “Saita Dokai”), and lower right is a work by Miyamotoya=kiln (source: from the Museum Digital Gallery of Ishikawa Prefecture Kutaniyaki Museum). The Miyamotoya-kiln’s style of painting is famous for a style (called Hachiro-de) in which, like the work of the lower right image, the Chinese-style noble red paintings is drawn in red adding gold filling with small patterns. On the other hand, as described above, it is clear that the style “ami-no-de” is different. Probably, in the course that this bowl by “ami-no-de” was handed down, it was supposed to be “Miyamotoya-kiln” only by looking at the red detailed drawing.

about creator of this bowl

The painter of this bowl would be one of the painters who followed the style of “ami-no-de” established in Sano Village) which Saida Dokai started, or may be himself.