colored and gold small plate with six pairs of phoenixes

condition: on the back a small chip, peeling of glaze, and dirt 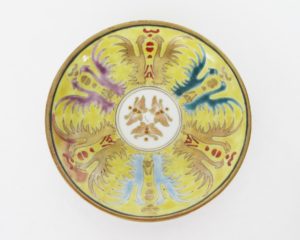 It is a small plate (saucer) of colored painting that adds gold like Kanazawa kutani on the image of gosai kutani (five colors : green, blue, purple, yellow and red  these were peculiar to ko kutani). This is a novel design as if it could not be seen in the works in 1877-1886.

On the yellow ground, three pairs of phoenixes are drawn each in green, blue, and purple, and another three pairs are drawn in gold. The patterns in red and gold is sandwiched between the phoenix and the phoenix. This design is gorgeous like that of the Meiji kutani decorated with red and gold.

On the center (part that receives the foot of a cup if this is a saucer), three butterflies connected are drawn. On the front, ｗith the exception of the phoenix, there are just gold lines on the edges, but on the back, various patterns are drawn at the width of several centimeters between the foot and the edges. Theses delight the eyes.

Band-shaped lines are painted so as sandwich the green and purple patterns. In addition, the unevenness pattern connected around the foot is painted in gold, and two red circle lines run at a width of 2 mm. Both red and gold are used as the main colors in Meiji kutani. 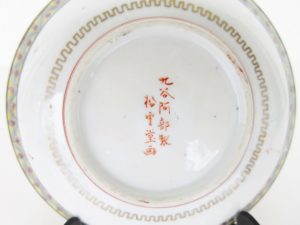 The names on the back are “Kutani Abe produced / Shoun-do painted”. This combination of great producer and skillful painter is extremely rare, as described below. In 1878, Matsumoto Sahei was honored a pen name of “Shoun” from Kanazawa Japanese painter Tokuda Kansho and after that he named his pen name “Shoun-do”, and in 1880, Abe Hekikai Kiln closed. It can be guessed that between 1878-1880 this work was completed successfully by Matsumoto Sahei who was outsourced with paintings from Abe Hekikai who was a first-class producer in Meiji kutani.

In Kanazawa, various measures by city government such as guidance at the Training Site for Encouragement of Industries were launched one after another to promote the improvement of Kanazawa’s porcelain painting. In 1869, Abe Hekikai inherited Minzan kiln as its heir, opened a porcelain painting factory with five kilns for painting at his house in Kanazawa and operated it until 1880.

In cooperation with porcelain merchant Marunaka Magohei, Abe opened a branch in Nagasaki and Kobe. The factory began producing mainly coffee sets, food plates, confectionery plates and other export products of daily necessities. These products were exhibited at the Vienna Expo in 1873 and gained fame and good customers.

However, despite its good performance, it suffered from export trouble in 1874 and incurred a large amount of debt. Then, in 1880, this factory was closed, and the management of the painting factory was taken over by the former manager of the factory Utsumi Kichizo.

It is said that Abe Hekikai had alternating current with the students of the Saga clan (a production area for Arita porcelain) during his study abroad in Nagasaki, and was strongly influenced by Notomi Kaijiro and Tokuhisa Tsunenori (both of whom transferred to various places in Japan to establish craft schools and developed the crafts). Also, it is said that he was early awakened to the export of kutani to foreign countries, witnessing the trading in Nagasaki.

In 1869, Abe Hekikai opened his painting factory with five kilns. It is said that he was not satisfied unless he could see the excellent painting, and then everything was excellent. This was also shown in purchases of the body and product. Kutani Shoza, Matsumoto Sahei, Matsubara Shinsuke, Okura Seishichi, Asai Ichimo (description and work) etc. were appointed as outsourcers. It is said that since their products were excellent, Kanazawa Kutani eventually surpassed Nomi Kutani and established Kanazawa kutani’s fame. So, Kanazawa kutani became synonymous with excellent products.

In addition, in the first half of the Meiji period, he continued to exhibit his own works at various expositions and achieved excellent results. Since he expanded the field of activities such as being involved in a judge of examinations and product fairs, he gradually became to play an advisory role in the promotion of crafts in Ishikawa Prefecture.

Matsumoto was said to change the style of his paintings in 1876, when he learned a painting in the Nanga style from Kanazawa painter Tokuda Kansho. Matsumoto drew in detail the figures such as Thirty-Six Great Poets and Hyakunin Isshu. They were painted in red, brown, black, and dark oil to create a painting style adding gold. This style was said to be the beginning of Sahei’s aka-kutani, and this painting style was highly evaluated overseas, and Sahira’s aka-kutani became an important export product.

Furthermore, in 1885, he completed the technique of double burning in which his works in red and black glazes were burned once in the kiln and after that, only gold was added and burned. In this style of painting, panels (window) were formed on the body in a gold brocade, and flowers and birds inside the panel were drawn in fine gold. Its precision was described as “like seeing the embroidery of the brocade thread on the fabric”.

After that, Matsumoto Sahei was good at both aka-kutani and ao-kutani, so around 1893, established “Shoun-do style” that fuses the two.