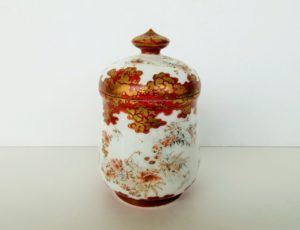 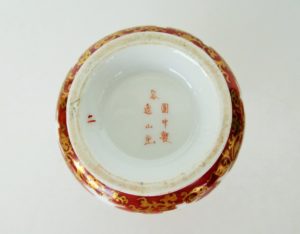 The Marunaka-gumi (group) started in 1867 when Marunaka Magohei founded a trading company in Osaka, and the business continued until the death of Marunaka. During that time, through overseas activities, he got great achievements for the improvement and development of various industries in Ishikawa Prefecture.

In the Meiji period, the Marunaka group embarked on the trade of kutani, handling products by Abe Heikai kiln  (coffee sets, tea set, food plates, confectionery plates, etc.) and exporting them from the branches in Nagasaki and Kobe. In addition, Haruna Shigeharu, a master craftsman, and Hatta Itsuzan worked as porcelain painters at the group, and the group ordered to Ijun-sha and exported their products because they had many master craftsmen. Branch offices of Marunaka group were set up in Paris and New York, and Kutani and Kanazawa copperware were actively exported.

In 1873, when 77 technical trainees from each field were dispatched to the Wien World Exposition in order to learn new Western techniques in terms of technology and product quality, the trainees received various guidance from Wagner, researched in kilns all over Europe and acquired various technology about plaster mold molding method, mizukin (liquid gold), pigments, glaze, turpentine oil etc. After that they returned to Japan, many of them were also involved in the Marunaka group.

In 1876, Marunaka Magohei himself went to the Philadelphia World Exposition and worked to expand the sales channels for porcelain, copperware, lacquer ware, raw porridge, Japanese tea, etc. At this time, Magohei met Notomi Kaijiro. After that, Magohei focused on export of Kutani and made an effort to expand “Japan Kutani” to the world, which was said to be due to his encounter with Notomi Kaijiro. In 1887, he received the award at the 1st National Industrial Exhibition held in Tokyo.

With the technical guidance of Notomi, “Kutani made by Marunaka group” gained a reputation as a luxurious item that was detailed and used a lot of gold and were highly evaluated as “Japan Kutani” in the Western countries. He took the initiative in developing overseas trade, such as by letting foreigners sort out export, and left great achievements for kutani. Magohei’s belief was that “it is for Japan to make good products and sell them abroad.”