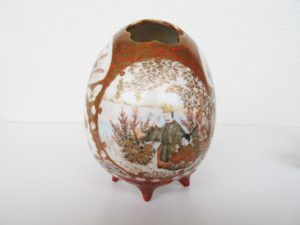 egg-shaped vase made by Watano

In 1877, Watano Kichiji took over after his father Watano Genemon won the award at the 1st National Industrial Exhibition held in Tokyo, and in 1879, tried to export Kutani directly to Paris, and in the next year, set up a branch office in Yokohama and worked to expand sales channels. In addition, he established the Japan Trade Association together with his colleagues in the Keihin (Tokyo-Yokohama) area and in 1882 he became the president of the Pottery Trade Alliance.

Watano’s contribution to foregin trade was that he ralized that pottery mechant was able to export directly without a comprador (Chinese supporting foreign traders). Taking advantage of the experience of studying abroad and the economic knowledge of the West by Imamura Yurin born in the Kaga domain, who later became the principal of the First High School (University of Tokyo), he paved the way for direct export to France and cultivated direct export to Europe based in Paris.

Another contribution was the efforts and the achievements of Watano and others in 1882, when crude and random products began to appear. Incorporating opinions on the “how production area should be” by Notomi Kaijiro（a leader in the innovation of ceramic technology）, Watano tried to unite the kutani industry in Nomi-county under the alliance agreement. Later, the kutani pottery trade alliance, the pottery (kilns) alliance, the pottery painter alliance, etc., were established, and under them he created collective organization to deal with industry problems. He took various measures, for example, making export samples, the apprenticeship test for porcelain painters and unified products produced in joint kiln etc. As a result, the style of painting of kutani was renewed and the export further increased.

Furthermore, in 1887, Watano Kichiji built several painting kilns at his own residence in Terai village to make high-quality products required by the Western countries and called them “Tenrai-do” (Tenrai-do) brand. Ishiyama Fumiyoshi, Sasaki Umematsu, Yamagami Sakichi, etc. were invited from Komatsu to paint the export kutani. Furthermore, in 1889, Tsuda Kyurin, Kashiwa Kakei, Murata Jintaro, Kubota Nanzan, Hiramatsu Tokitaro, Tanabe Keisen, etc. were invited from Kanazawa to make excellent kutani. The main products were big vases with a height of 1.5 m, large incense burners with a diameter of 90 cm, and jars, which were actively exported as trade products.