(1) red and gold three-footed bowl with peony and bird 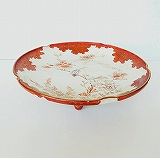 This bowl (shallow) has a sense of dynamism. The painting on the bowl that a single bird perched on a branch with its head down is overlooking a large peony. (continued)

It is molded like a teacup water with a slightly large lid, and it is a well-shaped accessory case with excellent pattern and shape along with the lid.  (continued) 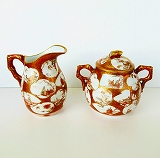 On the entire surface of the two pieces, small panels of various shapes are partitioned in brocade, and paintings of figures, flowers and birds, (continued)

It is unknown that Hatta Itsuzan was born and died, but it is found that he learned pottery from Sasada Yuzan (already described on this site), and Ishino Ryuzan (already described on this site) was one of his disciples. So, he was one of master craftsmen in the Meiji period. And many works were commissioned by overseas pottery merchants such as Marunaka Magoji, Watano Kichiji and etc. so, he was undoubtedly one of the master craftsmen of Meiji Kutani.

It is said that he had a skill of kutani fine print, but he was famous for works such as red paintings and his skill of brocade painting.