red and gold plates with persons and landscape in four frames 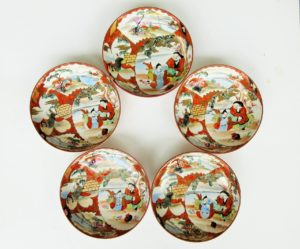 Plates with a diameter of around 15 cm could serve as both large and small plates at that time, so they were useful as familiar plates and were produced a lot. These plates were often held in five, ten, or more pairs in wealthy homes such as merchants and shipowners, and after gradually spread to the common people. 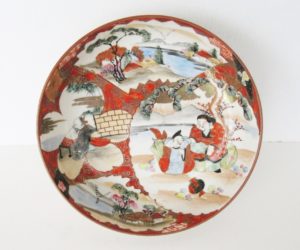 The four frames are taken to the very limit of the plate and various designs (pictures) are drawn in them. Landscape paintings in the two frames and persons in the other two are nicely drawn. The seaside scenery unique to the Kaga region is colored with natural colors. In the painting of persons the literary person, who is sitting in a room facing the seaside, reads a book, and the god of business, Daikoku-sama and Budai-sama who are sitting under the pine tree at the beach, are drawn with rich expressions. It looks as if a master craftsman is creating the pleasure of eating on this plate, talking about these paintings. It is a small piece made in the Kaga region, which is rich in culture. 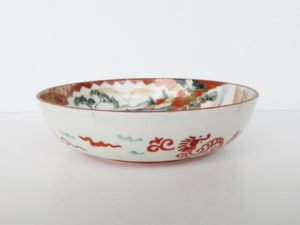 Perhaps this plate is thicker from the center to the foot, so it has a tough, inexpensive finish for everyday use. Because the hard and thin body such as egg-shell is expensive and could not be manufactured in Kaga region. Each plate weighs about 250g (more than twice the weight of the plates of Kameda Sangetsu or the first Hashida Yosaburo), and the edge is slightly curved upwards. So, it also serves as a “dish”. Therefore, this type of plate has a durable finish and spread to the common people as a practical tableware. 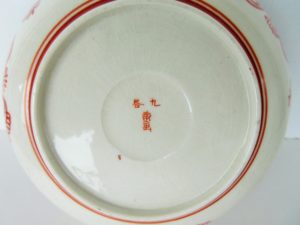 The back name is written as “Kutani / Higashi painted”. It is written in a slightly sunken circle in the center of the foot. Rather than having a flat surface in the foot, it seems that the creator of this work wanted to give it a more varied feeling when holding it.

About creator of this work

Higashi Bunkichi learned porcelain painting from Saida Dokai (斉田道開) and was later said to be a master of red fine paintings in “Dokai-style”. On the other hand, it is said that because he also had excellent paintings on daily miscellaneous goods, so such works were also well received. It is also known that he worked for painting together with Takada Ryouzan at the painting factory managed by pottery merchant the second Oda Jinzo.