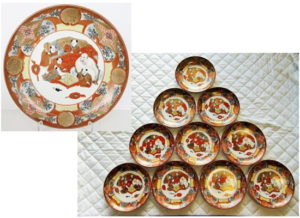 Ten plates of over 23cm created by master craftsman, Minowa Tsurumatsu are put in a large wood box together. From the writing on the lid and side, though it is unknown whether it is the same theme of painting, it is found that 20 other plates were created at the same time. This quality and quantity of these medium plates is rare and they have elaborate paintings, so these were served for the banquet where many people gathered in connection with the “Tanabata Festival” (*), looking at the “Tanabata set” and “plate for grilled fish” written on the lid of the box. It could be imaged that the scene of thirty plates lined up at the banquet would be spectacular.

*banquet in Tanabata Festival; In the Edo period, Tanabata Day (July 7 of every year) was designated as a day of the Five Festivals (the day when the ceremony was held) and it is said that a simple banquet was held on that day. It is thought that only banquet remained informally even in the Meiji period. 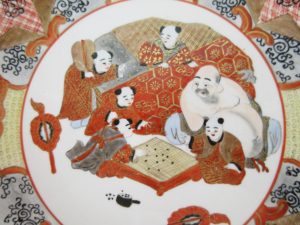 The relationship between Tanabata Festival and “Hotei and children” is unknown. On the other hand, since ancient times, Igo (board game of capturing territory) was included in the “four arts of Koto, Igo, calligraphy and painting that are played by hands”, so the painting theme that the three gods of Hotei, Daikoku and Ebisu enjoying Igo was created in China and after transmitted to Japan. Influenced by this theme, the theme of “Hotei and children” playing Igo was created and considered to be auspicious for a celebration.

It is interesting that all ten plates are painted by hand. Because even a master craftsman made “difference” in the design in the process of creating ten plates, for example, the expression, shape, appearance of Hotei and children, props, especially the number of Igo stones on the Igo board, state of placing them on the board. Such “differences” are enjoyable one plate by one plate. This theme is also found in the works of other master craftsmen, for example, the work of Takada Ryozan, “brocade and red plate with Hotei and children playing Igo”. 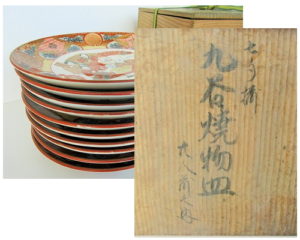 The medium plate over 23cm was treated as a large plate sometimes, and it is thought that large grilled fish was served on this plate. When looking at 30 plates at the Tanabata banquet, it seems that Tanabata Festival was transformed in the latter half of the Meiji period. Since the meal was served such as “grilled fish” at the banquet, it seems that attention was paid only to holding a banquet, so a gorgeous plate created by a master craftsman was required in the process of turning into a gorgeous banquet with staple food on a large plate to entertain many people.

The back name “kutani produced / Minowa painted” is written on the back and the writing “Tanabata set / kutani plate for grilled fish / 10 plates of 30” is written on the wood box and this shows that it is a part of thirty-plates set.

about creator of this work

Minowa Tsurumatsu studied porcelain painting under the first Hashida Yosaburo and after mastered the technique of red painting.

Tsurumatsu created his painting style of snow rings and roses. He also worked on big items for export and created many works that incorporated fine calligraphy. It is said that he was so good that if drawing fine calligraphy on the inside of sake cups or tea cups and snow rings on the outside, it would be said to be Minowa’s work.