colored and gold cup & saucer with figure of a hundred persons

Sasada Yuzan created a cup and saucer with innumerable persons drawn on the eggshell body (eggshell type). To the viewer, it looks like a pattern in which the persons appear vaguely transparent on the white inside of the cup. Yuzan did not end by itself. He added brocade decoration to the inside and outside the thin edge of the eggshell body. This work shows Yuzan’s skillfulness in expression.

Many of the excellent tableware exported at that time were painted by potters some painting factories, which held many skilled painters, so it is rare that this work was created by Sasada Yuzan, a master craftsman in Kanazawa kutani. Other tableware created by master craftsman is one by Hatta Itsuyama, who was a disciple of Yuzan. 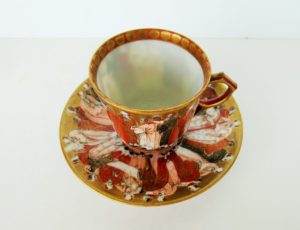 The persons figure that covers the surface of the cup and saucer is called the “Hyakuro-zu” (百老図). The origin is a design carved on the surface of solid ink in the Ming Dynasty in China and is said to be 97 hermits or 97 people who pursued ideals indulging in philosophical discourse. In Japan, it was drawn in ink painting. The face, costume, appearance, number of people, etc. were changed by the painter. It is said that the persons figure was first introduced in the porcelain painting by Saida Dokai of Sano kutani, who was active in the late Edo period and in the Meiji period, it spread to Kanazawa kutani, where Yuzan was active there.

In Western countries this painting theme was called “a thousand persons figure” and more persons were drawn in detail in kutani, which is exported to Western countries, yet making a change to each person’s face, costume, and appearance and decorating them, they were drawn like a pattern. This work by Yuzan was also sold with the name “cup and saucer with a thousand persons figure.

In the early Meiji period, a lot of tableware used in everyday life in Western countries were exported along with large vases and incense burners full of transcendental craftsmanship and splendid decoration. Increasing demand for “lighter and stronger” tableware came to the pottery merchants, who responded to that demand by using the eggshell body. 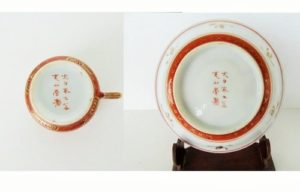 “Dainippon Kutani / Yuzan-do made” is written on both the cup and saucer. From the form of the back name, it is found that it was one of exported kutani.

about creator of this work

About the creator of this work, please search for “Sasada Yuzan’s Collection and his history“.