① colored and gold plate with figures and flowers in panels 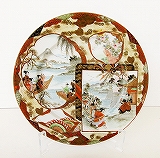 It is painted using techniques and paints unique to kutani, such as panels, fine painting and the convex by painting repeatedly gold or white paint. (continued) 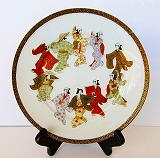 It is a rare design plate. Its composition is made up of only people who are dancing in a circle to fit the round shape of the plate. Probably this design that was hard to see in Kutani even in the latter half of the Meiji period   (continued)

Akiyama Komajiro was born as the second son of a samurai of the Kaga domain. He entered the Ishikawa Research Institute in 1863, studied porcelain painting with Suda Seika and graduated in 1880. Furthermore, after he learned painting, he worked at Fujioka Iwahana-do, a famous kiln in Kanazawa at that time.

In 1883, he entered the Shoun-do managed by Matsumoto Sahei, and in 1908, he worked as a foreman until the Shohei-do closed. In 1888, he became the son-in-law of Sahei’s brother-in-law Akiyama Heisaku, and changed his family name to Akiyama.

When Shounko-do was succeeded by Matsumoto Sakichi, who was adopted by Matsumot Sahei, Akiyama became a factory manager of porcelain painting.

It is considered that he produced excellent works with his own back names. Perhaps his experience of the factory manager was put to good use in his works, which have the back name “Made by Akiyama,” “Akiyama-do,” “Akiyama Komojiro Shoten (store)”.